Rob Alexander: Being Myself (Album Review)

Armed with a sharp, bluesy voice, three of Elton John’s band members, and several tracks’ worth of solid music, Rob Alexander’s Being Myself will have you saying, “The doctor is in.” This anesthesiologist turned rocker has lots to say and you’ll want to listen. 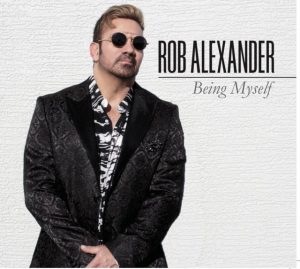 After a successful debut album in 2018, Rob’s second release is a strong follow-up. Being Myself is the 2020 version of adult contemporary, paying tribute to Elton John in “Friend of Mine (Elton’s Epic)”, a nostalgic track with some pop melodies added for good measure.  “American Love Song” is a heartfelt dedication for all, literally, who have ever been heartbroken. But there’s also rock to give the album musical diversity. There’s no better example than the very rock sounding “Another Love Affair”.

That’s just a handful of the 15 tracks Rob brings to you. There’s much more to explore about love, life, and experience that Rob mixes together in Being Myself. It’s first rate stuff from the doc of rock!