Artist Hope’s new album Red Man is a refreshing, yet strong comment on indigenous people’s struggle in the modern world. This is a man not afraid to speak truth to power and make bold commentary on Red Man, which at under 40 minutes, says a lot. From cultural appropriations to reconciliation, Hope has plenty to say to the world about his people. 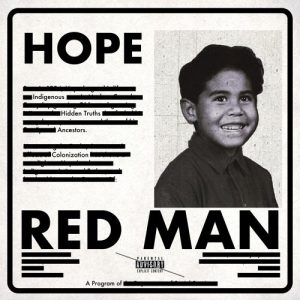 “Opening Ceremony” kicks off the album, where Hope welcomes all to what he’s about. From there, “Never Fail”, “100 Million”, and “Generosity”, all the way to the closing track “Stand Up”, Hope kills it with tons of inspiration, great beats, and hope. Older folks will enjoy the old school vibes, and there’s some stuff that sounds current, but I can’t really say it’ll appeal to the masses. It’s a critical hit no doubt, but its audience will likely be those who like to think while grooving to the music. This aren’t radio-friendly tunes, but something you put on when you’re with friends to turn them onto something new to learn a thing or two.

Enjoy it with three beers and have a good time listening.