William Shakespeare has written some of the greatest comedies of all time, including As You Like It and All’s Well That Ends Well. Out of all of the comedic plays that he wrote, which one is the greatest, though? Some scholars would argue that The Tempest is Shakespeare’s comedic masterpiece because it combines comedy, drama, fantasy, and magical elements that make the play (and this BBC adaptation) very compelling.

The Tempest is definitely a fantastic play, and the BBC used state-of-the-art special effects to make this TV production absolutely magical. Ariel is such a great character because he looks like a male Tinkerbell (of Peter Pan fame). The supporting cast is also very strong, which includes the performers who played Miranda and Ferdinand (the main young romantic couple). The real star of this TV film, though, is Prospero. His name directly relates to “prosperous” and/or “prosperity” given his contributions to the play as well as the overall plot. *Spoiler!* The ending is one of the best moments because Prospero speaks a variation of the Lord’s Prayer with the lines, “As you from crimes would pardoned be, let your indulgence set me free.”

On a side note, it is a funny coincidence that the characters Ariel and Sebastian would have their names reused in Disney’s timeless classic The Little Mermaid (1989). There are actually some very interesting parallels between this BBC production and the animated film (including the significance of water and the mystical elements that add splendor and spectacle to both of these films).

The Tempest indelibly lives up to its title because it is a powerful Shakespearean tragicomedy that remains a landmark in both the literary and cinematic world (which includes the small screen). Both this play and this film are forces of nature (pun intended).

Take a Drink: for every reference to water and wetness

Drink Cautiously: when there are mysterious noises on the isle

Drink Yourself Silly: when Caliban, Stephano, and Trinculo become intoxicated (but not literally, please).

And Do Not Be Sober: during the intense storm scene (which is why this play and BBC film are both called The Tempest) 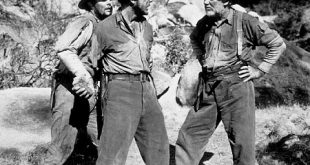 The Treasure of the Sierra Madre (1948) Movie Review