Nicolas Pesce has been establishing his arthouse horror bona fides not unlike Ari Aster and Robert Eggers with his first two idiosyncratic, fucked up, and thoroughly original films, The Eyes of My Mother and Piercing.  So that’s why it’s so surprising that he took on the somehow obligatory studio remake of The Grudge. 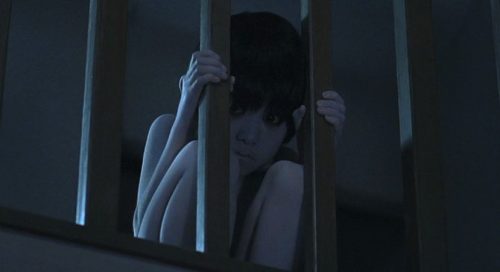 Somehow, the most 2000s of horror franchises

In The Grudge, an American businesswoman has brought the generic haunting of “a curse that is born when someone dies in the grip of extreme rage or sorrow” home from Japan to a suburban house where, surprise, all of the homeowners start turning up dead.

Well, I liked the last shot, and not just because it meant it was over.  It’s something different, horrifying in its slowness and banality.  It’s a perspective you wouldn’t expect to see in studio horror remake of The Grudge.  Too bad it took until the end of the film to see something like that.

Also, special props to Lin Shaye, who knows exactly what kind of movie she’s supposed to be in, and brings the crazy as best she can.

The truly lame and tacked on-feeling jump scare in the very first scene set the stage- this is a reboot of The Grudge that may as well be a mid-2000s sequel to the original English-language remake of The Grudge.  Everything is blue and yellow-filtered. poorly stitched together homage to something that wasn’t any good in the first place and feels like a time capsule now. 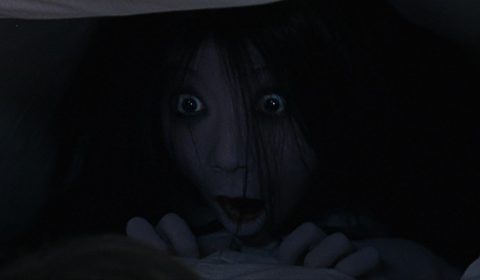 This film does introduce one innovation- a plot that cross-cuts between multiple stories across different time periods (but only a year or two at a time).  There must have been a point to all of this, but I can’t discern it- it builds to almost nothing, or I suppose “builds” isn’t the right word.  “Leads” might be more apt.

This approach and all of those jump scares just completely saps every ounce of tension from the film.  Instead, Pesce cuts away the second any sustained tension threatens to develop.  Gotta get back to that story we already know the ending of thanks to the Blue-sized clues you left all of us slack-jawed yokels in the audience! 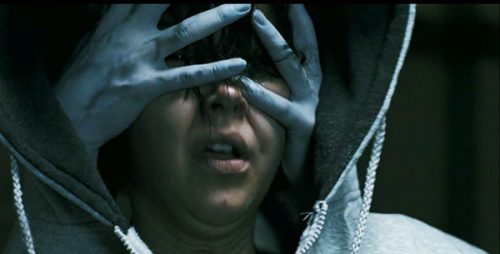 Are any of these pictures from this year’s film?  Who knows?

The worst part of all of this is that from the publicity it’s clear that there’s no good background story of creative muddle or studio interference to explain all of this- Pesce solely wrote and directed this film, and is reportedly happy with the result.  This year Aster and Eggers gave us Midsommar and The Lighthouse.  Guess I read that one wrong.

Despite the  at least once-talented Nicolas Pesce, The Grudge feels like the long-lost, maybe circa 2011 fourth sequel to the 2004 remake.  That’s nothing but a bad thing.

Take a Drink: for every attempted jump scare

Take a Drink: for every shadowy figure in the background

Take a Drink: for every death

Take a Drink: whenever anyone smokes

Do a Shot: every time “what do we do when we’re scared” is repeated