Because we apparently didn’t have enough, the latest entry in the scary-ghost-lady-in-a-white-dress horror subgenre is The Curse of La Llorona.

The film, part of the Conjuring universe (Yes, this is a thing. Also, Rest in Peace, Lorraine Warren) takes inspiration from a Mexican urban legend. According to folklore, a beautiful woman named Maria met a nobleman who was traveling through her village. They fell in love, married, and had two sons. After several years the man began to grow more and more distant toward her, only paying attention to their sons. When he returned from a trip accompanied by a younger woman, Maria went into a jealous rage and drowned her children to punish him. After she realized what she had done, she then drowned herself. Legend has it that she is eternally stuck between the land of the living and the land of the dead, searching for her children while kidnapping and drowning any child she encounters. There are numerous accounts of sightings of the ghost, usually near bodies of water. She can also be heard crying (La Llorona translates to “The Weeping Woman”) and children are told to run away from the sound or suffer the fate of becoming her next victim. The legend is also used to force children to behave, which, yeah, that’s way more effective than something like Elf on the Shelf. “You better listen to me or [whisper] La Llorona [/whisper] will KILL YOU!” That’ll get a kid to clean their room!

The film’s story is set in 1970-something Los Angeles. Mother and social worker Anna Tate-Garcia (Linda Cardellini) is struggling to juggle her job, her children, and keeping up a big, old house with conveniently creaky doors following the recent death of her police officer husband.

At a wellness check on one of her clients whose children seem to have gone missing, Anna finds the woman (Patricia Velasquez) behaving strangely and the two young sons locked in a closet. The children are taken into protective services for their safety, but it’s no use. Their bodies turn up days later washed ashore a river. The mother has a solid alibi. So what happened? 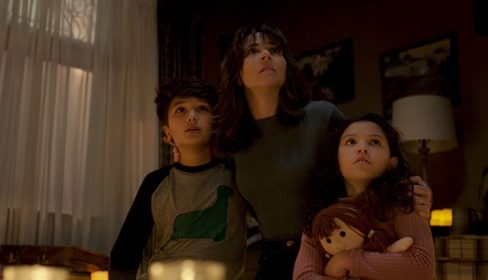 As Anna attempts to figure it out, strange things start to happen involving her own children (Jaynee-Lynne Kinchen and Roman Christou) and she soon learns this is like no case she’s ever taken on. 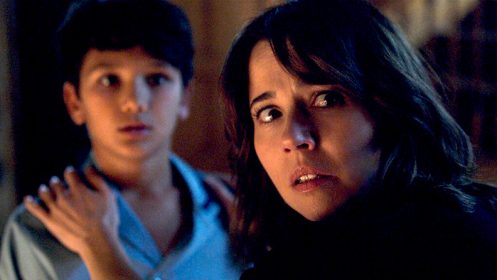 If there’s anything worth toasting in this one it’s Linda Cardellini finally getting a lead role in a film. It’s easy to forget just how many movies she’s been in in her over two-decade career. (According to IMDB, that answer is 69!)

Did you ever realize she played Chutney in Legally Blonde?

It’s just too bad this was the one in which she finally was given the opportunity. That’s no disrespect to Cardellini, she’s great—way better than this movie deserves in fact —and seizes the opportunity to showcase her versatility. Hopefully this will lead to more starring roles. 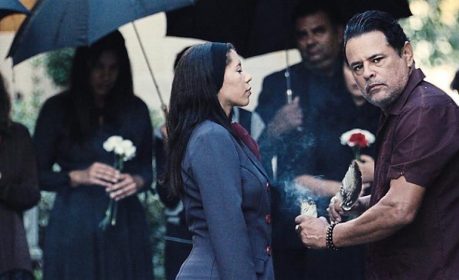 The film picks up in its third act (as much as it can) with the introduction of ex-priest/current shaman Rafael Olvera (Raymond Cruz). Like Cardellini, Olvera thoroughly commits and brings a much-needed bit of humor to the movie.

There are some interesting and inspired visuals, particularly one involving an umbrella, that show some inventiveness on the part of first-time director Michael Chaves, though he is held-back by his obvious attempt to imitate Conjuring series-creator James Wan’s style.

The film squanders a great concept and adds nothing to the source material. Reading about the mythology of La Llorona is far more chill-inducing than anything in the movie.

There may have been a time when it would have been a perfectly effective scare-fest, but with recent horror films like Hereditary and Us upping the game and changing the horror landscape, The Curse of La Llorona feels dated and familiar. Every beat is so obvious and easy to predict, it gets tiresome, making the whole experience feel a lot longer than its 93 minutes.

Do you like jump scares? If you’re going to see The Curse of La Llorona, I really hope you do. I attempted to keep track of how many there where during my screening, but lost count.  Of all of them, one singular instance got a tiny reaction out of me. Oh and you know those jump scares that then turn out to be nothing at all? Hope you like those too!

It’s so overdone, at times it feels like one of the Scary Movie installments. I was waiting for La Llorona to be hiding behind a curtain giggling and one of the kids to say “Uh, lady, I can see you. You’re behind the curtain,” and then La Llorona would be all “Dammit! Okay, walk out of the room and come back in again.” 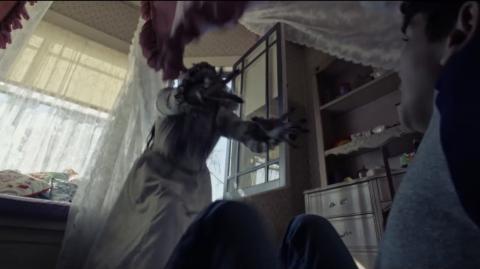 One of a horror movie’s biggest crimes (after being not scary, which this one is an offender) is establishing rules and then later breaking them. Rafael states at one point that La Llorona is attached to the children themselves, not the house (where have we heard that before?)  so moving to a different location wouldn’t help them. Then, twenty minutes later, he is lining the perimeter of the family’s home with magic dust so La Llorona can’t enter. Which is it? (By the way, this leads to one of the dumbest scenes in horror movie history.)

Also, the rules of La Llorona’s mobility change from scene to scene as well. She apparently can teleport, yet has to open doors to enter a new room?

My final beer is for my biggest question about this movie. WHY THE HELL WON’T ANYONE TALK ABOUT SEEING LA LLORONA?

My best guess at an answer is, because then it would only be about a half hour long. Over and over, various members of the family come into contact with the ghost and later when they regroup with family members and someone asks what’s wrong or what happened, the character says “oh nothing,” or “must be my imagination.” Even when La Llorona leaves similar burn marks on them, no one is ever like “Hey, I have the VERY SAME marks on my arm. Did you see the scary ghost lady too?” Nope, no one says a word and they instead make excuses for the strange stuff going on because, well just because.

This movie had a lot going for it. A real-life scary legend as a launching point, a strong cast, and a tie-in to the biggest current horror franchise, yet it feels like they just did the bare minimum to churn out a quick profit. This is maybe worth a stream on a night when there is really nothing better to watch, solely for the committed performances of the cast.

Take a Drink: whenever a pool of water is shown

Take a Drink: every time someone says “La Llorona”

Take a Drink: for every jump scare (small sips)

Do a Shot: whenever you get frustrated that no one talks about seeing La Llorona

Do a Shot: for the DUMBEST character decision you’ll likely see this year (You’ll know it when you see it)