The Current War documents the decades-long struggle between Thomas Edison (Benedict Cumberbatch) and his Direct Current (DC) and George Westinghouse (Michael Shannon) and his Alternating Current (AC) to become the standard that would light up the night across America.  The young and brilliant Nikola Tesla (Nicholas Hoult) finds himself on both sides of the divide as he tries to bring his even more radical ideas to life. 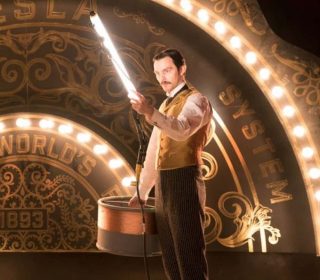 The pitch behind the theatrical release of this film is that it’s director Alfonso Gomez-Rejon’s long struggled for director’s cut against Harvey Scissorhands, who receives the blame for the film’s original disastrous bow at TIFF in 2017.  I’m pleased to report that no real signs of the reported incomprehensibility of that cut remain, although it perhaps also proves the limits of a second edit to retrieve masterpiece from mess (but more on that later).

However, those elements that allow for the attempt are very much worth your time.  I mean, it’s hard to take a cast front-lined by Benedict Cumberbatch (very much cumberbatching this role) and Michael Shannon (not at all shannoning his- instead, displaying intriguingly measured and humanistic character work), not to mention the oft underrated Nicholas Hoult, who somehow makes the strongest impression as the brilliant and likely somewhere on the spectrum Tesla. 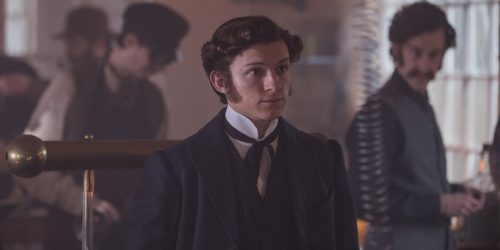 And a special nod to Spider-Tom Holland, perhaps the smartest businessman of the lot.

The history lessons fly by on the strength of the actor pairings, Chung Chung-hoon’s dipping, weaving camerawork reminiscent of Emmanuel Lubezki’s for Terrence Malick in places, and the new lovely score by either Saunder Juriaans and David Bender or Dustin O’Halloran and Hauschka (good luck figuring out who scored which cut).  The climax, when Edison and Westinghouse finally meet face to face, is particularly beautifully done.

Too bad that everything leading up to it doesn’t always fall together in the same way.  Some folks laud the quicker pace at the beginning of this cut, but for my money it’s cut to hell- nothing is left to develop and it feels like small but load-bearing scenes that had to have been in some iteration of this film or script at least have been omitted.  The film finds its sea legs towards the end, but by then you’re just surprised at the quality of the climax, not primed for it.

“Nothing will ever be named Tesla again!”

“I thought impossible was not in your vocabulary!”

Michael Mitnick’s script never sees an opportunity for an on-the-nose line that it feels it can pass up, which is sometimes, but not always, masked by the quality of actor delivering it.

Their chemistry is *ahem* electric!

The Current War, even in its current form and despite the aesthetic touches and quality performances, is a fairly conventional approach to some fascinating history.

Take a Drink: for every lightbulb lit up on Edison’s competitive map of the country

Take a Drink: for every title introducing a place or title

Take a Drink: for every too cute turn of phrase

Take a Drink: any time somebody uses a phonograph or early movie camera

Do a Shot: for every portentous flipping of a switch or grand demonstration