It was one of the most (in)famous movies ever made. Some would consider it the biggest flop in cinematic history. Behind the glamour and visual beauty of Cleopatra (1963), this behind-the-scenes documentary strips away the gaudy splendor of this notorious film to reveal how it came about in the first place.  Just like the title of the documentary, Cleopatra really was a film “that changed Hollywood”.

This behind-the-scenes feature provides a lot of historical information into the making of one of the most famous films ever produced. Robert Culp provides great narration while revealing a story that is just as powerful as the finished film (not to mention the true story of Cleopatra during ancient times). The documentary also reveals the dangers associated with working in the entertainment business, which includes the contrast between artistic merit and box-office profitability. Cleopatra (1963) is a great example about how movies involve both art and money because film-making is a type of artistic endeavor while Spyros P. Skouras heavily fixated on saving 20th-Century Fox from bankruptcy with this movie.

Ironically, Cleopatra made a lot of money during the 1963 box office fiscal year, yet it has long been considered one of the biggest flops ever made. Another irony is that this is an Academy Award-winning film even though some critics heavily lambasted the film itself. The documentary also suggests that part of the reason why Cleopatra generated ticket sales is because of the love affair between Elizabeth Taylor and Richard Burton that made the paparazzi go wild. The documentary does an excellent job at presenting the contrast between film as an art form and film as a cash grab.

The story of Cleopatra has stood the test of time because her love affairs with Julius Caesar and Marc Antony really did change the course of world history. Her name itself evokes opulence, majesty, and tragedy. The making of Cleopatra (1963) is also one of the most controversial stories that is just as scandalous as both the historical Cleopatra and the 1963 epic film. Because of all of the chaos and confusion that went into the making of Cleopatra, it is safe to say that a film like Cleopatra will (most likely) never be made ever again. 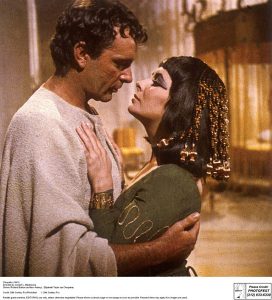 Take a Drink: every time the documentary features commentary from the original cast and crew

Take a Drink: every time the documentary features film clips from Cleopatra (1963)

Drink a Shot: every time Alex North’s Oscar-nominated score composed for Cleopatra (1963) plays in the background

And Make Sure that Your Drinks Are Safe to Drink: because it is safe to say that a movie like Cleopatra (1963) will always be its own unique entity for all time