It’s the most wonderful time of the year!! October! Halloween month! And what better way to kick it off than a fun slasher flick about a masked killer hidden in the one place he wouldn’t be suspected: a haunted attraction?

I’m actually shocked this has never been done before as it’s a great concept (if it has, hit me up and let me know). Who hasn’t walked into one of those haunted house/graveyards and wondered “what if someone in here was for real?” (If you haven’t then, you definitely will now. Happy Halloween!)

Hell Fest is the mother of all haunts: a traveling horror amusement park featuring dozens of sets – haunted houses, mazes, rides, shows – and thousands of workers… let’s not think about the logistics of how something of this capacity this would actually exist because it would never would. But it’s in town and everyone’s psyched! One in particular is even psycho!  It’s killing time! Now he just needs some dumbass kids to terrorize!

Let’s meet our dumbass kids, shall we? There’s probable Final Girl Natalie (Amy Forsyth), who is visiting her best friend Brooke (Reign Edwards) after moving away for college. They even have those “Best Friend” half-heart necklaces so you know it’s real. Natalie’s not so happy to see that Brooke’s roommate is her childhood nemesis Taylor (Bex Taylor-Klaus). Taylor… ugh, so you know how you have that one friend who is brash, insufferable, and nowhere near as funny as they think they are? (Note: if you answered “no,” you are that friend.) Well, that’s Taylor. Taylor has a boyfriend named Asher (Matt Mercurio)- I honestly didn’t even realize that character had a name until I just looked it up now so that should tell you everything you need to know about him. Brooke has a boyfriend, too, Quinn (Christian James), his main character trait is that he’s pretty. That leaves Natalie without someone to make out with. But no fear, her longtime crush Gavin (Roby Attal) is coming along too, in fact he’s the big shot who got the VIP tickets to Hell Fest! (Which means he’s kinda the one to blame for everything that happens.)

Natalie isn’t as jazzed about the plans for the night as the others, but she’s game. Even when it’s mentioned that there was an actual killing a few years back at a similar haunt, she doesn’t seemed very fazed. She agrees to go with the group to the most intense section of the park called, appropriately, Hell.

But she soon realizes just how intense Hell Fest is when she witnesses what she thinks is part of the show but can’t shake how real it appeared. Then she notices one of the masked workers has taken a special interest in her…

I was so excited for this movie. Seriously, what a fantastic premise for a horror movie! A place where the goal is to produce realistic-looking scares with a real knife-gleamin’, no-feelin’, axe-wieldin’ madman loose inside who no one notices? Count me the hell in. The result? Well, wait on that for a bit. 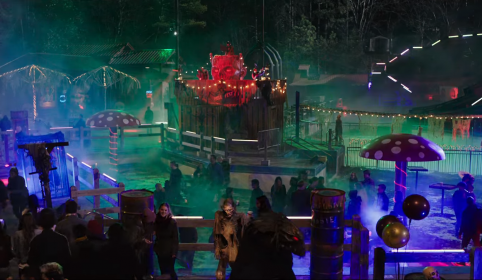 Hell Fest, the park, is great-looking. It’s evident that most of this film’s budget went into the production design. The different rooms and mazes are visually stunning and pretty darn spooky. It looks like a fun place to go –minus the actual killing part.

The R-rated film doesn’t shy away from gore to attain the more box-office attractive PG-13 rating, which is refreshing, and there is one good, wince-worthy kill that cleverly makes use out of the surroundings. Yeah, one.

I walked out of this movie legitimately angry. Not disappointed. Angry. They had such a good concept and did absolutely nothing with it.

A haunted attraction has endless potential for some inventive, gnarly kills, but as I mentioned, there is only one. By the end of the movie, the killer is just running around openly knifing people. Likewise, the setting also gives the victims many opportunities to use the props to their advantage (weapons, disguises, hiding places, etc). It isn’t until very late that they actually figure this out.

There are several moments where it seems as though something interesting is being set up, however nothing ever comes out of it. No twists, no big reveals, just a by-the-numbers, uninspired slasher flick.

Now, there’s nothing wrong with a throwback killer stalks and kills dumb kids one by one type horror movie but to do that right you need two things: a scary, memorable killer and victims the audience wants to root for. Again, this movie fails on both fronts. 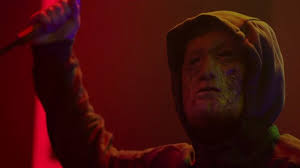 I get what they were going for with the killer: a non-descript, could-be-anyone lunatic, but he’s so generic and unremarkable he doesn’t even get a name. (Dollar Store Mask Guy I guess?) He’s so dull he even has a public domain theme song.

The doomed millennials range from meh to OH-MY-GOD-DIE-ALREADY! This is in no part the fault of the cast, who do the most with the very little they are given. The dialogue is cringe-worthy and most of the main characters are so annoying that it’s impossible to muster up any concern for them. And of course, of course, every single one of them makes the stupidest possible choice every chance they get. Split up? Great idea! Run into the big Hell haunt instead of staying outside and blending into the crowd? Great idea! Knock the maniac killer down and run away instead of oh, tying him up or just killing him? Awesome.

It’s almost pointless to go into plot inconsistencies and stupid contrivances in a movie like this, but hey, I had to sit through this thing so let’s do it anyway.

This film suffers from what I call Saved By the Bell syndrome. Whenever the main characters enter the attractions, they are the only ones inside. So like, where are the employees that work inside the haunts? We see very few of them. Also, where are the other patrons? There are thousands of people outside, but once inside, it’s just the main group.

You’d think that popular attraction of this magnitude would have amped up security to protect against potential lawsuits, especially since there was a recent death.  Not to mention this park also serves alcohol and allows the actors to touch (and at one point, pick up and carry away) attendees. But no, there’s like two security guards who couldn’t care less.

And what haunt uses real axes, syringes, and guillotines as props? Where are the emergency exits (anyone who has ever been to one of these knows there are exits for guests that get a little too spooked). I could go on and on.

At one point the killer gets a hold of the cellphone of one of the victims (another wasted opportunity), which sets up  a sequence in a bathroom in which Natalie (again, the only person in the bathroom in a park full of thousands) receives texts and pieces together that they aren’t coming from the person she thought. She hides in a stall and attempts to call 911 immediately after receiving one. But guess what? She suddenly has no service.

It’s just so, so lazy. Not one of the six, yes SIX writers thought of any of these things. 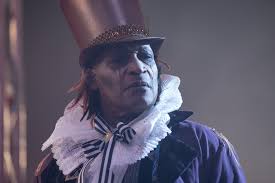 Since the film squashes any potential to do anything remotely interesting with its concept, setting, and characters, is it any surprise it makes very little use out of its big horror cameo (Candyman’s Tony Todd)?  Todd lends his voice to various park announcements and shows up in one scene for about five minutes. It could have worked as a fun surprise if his involvement had been a secret, but he’s prominently featured on the poster so fans who may have been expecting more of him will no doubt be disappointed.

I guess if you don’t ask any more of a horror movie than provide a predictable plot, a few jump scares, and a bit of brain-splatter then by all means, knock yourself out. But for anyone hoping this would be a new slasher classic, save yourself the trouble and go to a real haunted attraction instead. It’s time and money much better spent.

Take a Drink: every time someone says “Hell Fest”

Take a Drink: whenever the killer hums “Pop Goes the Weasel”

Take a Drink: for every sarcastic remark a character makes

Take a Drink: whenever characters split up

Do a Shot: for every jump scare

Do a Shot: for every kill