Birdman or (The Unexpected Virtue of Ignorance) has been hailed as one of the greatest films of all time ever since its initial release in 2014.  Starring Michael Keaton, Edwards Norton, and Emma Stone, this contemporary classic examines the nature of show business while also openly displaying the harsh reality of aging within the entertainment industry.  Hollywood has an interesting fascination with films about Hollywood itself, and one of the earliest examples of this phenomenon is The Band Wagon (1953). 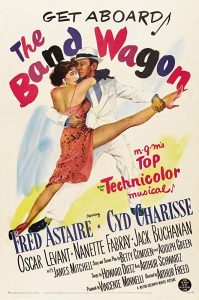 Starring Fred Astaire and Cyd Charisse, this classic musical reveals what happens behind-the-scenes when thespians produce live entertainment.  There is even an entire song and dance number entitled, “That’s Entertainment!” within this film!  Even though this film left the Oscars ceremony empty-handed, it still deserved its nominations for its original score, costume design, and its screenplay.  A funny coincidence is that Birdman won the Oscar for its original screenplay, and shares parallels between The Band Wagon, especially since Fred Astaire was a fading Hollywood star when The Band Wagon premiered in 1953.  It is almost as if Fred Astaire was a retrospective Michael Keaton! 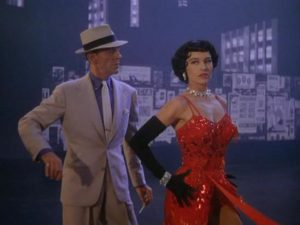 Unfortunately, Fred Astaire’s character is not that charismatic, especially since he became a grumpy old man both literally and figuratively. 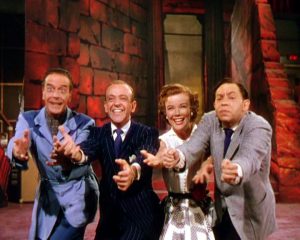 In terms of Oscar history, some of the most iconic films ever made have earned recognition for being about entertainment itself.  Famous examples of meta-fictional films (which are movies about entertainment) include Shakespeare in Love (1998), La La Land (2016), and, of course, Birdman (2014).  Nevertheless, timeless cinema truly is timeless, which is why films like The Band Wagon (1953) age literally, yet remain artistic achievements indefinitely.

Drink a Shot: for every gorgeous costume that Cyd Charisse wears in the film