Rebel Without a Cause (1955) Movie Review

Adolescence can be one of the toughest periods in life.  Not quite a child, and not a fully grown adult, teenagers will oftentimes rebel against their parents (and society as a whole) as they struggle to establish their identities.  That is the main idea of one of the most celebrated films ever made, Rebel Without a Cause (1955). 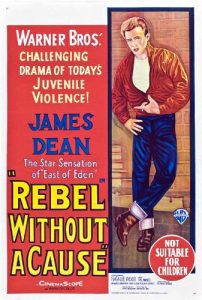 Starring James Dean right before his tragic death, Rebel Without a Cause has stood the test of time as a cinematic classic.  This film is undeniably dramatic (and it is a bit surprising that Hollywood censors would even allow this film to play in theaters during the 1950s during its initial release).  Natalie Wood and Sal Mineo both received Academy Award nominations for their supporting roles, and James Dean delivers what is perhaps his most famous performance even though it did not garner him an Academy Award nomination for his leading role.  The screenplay is definitely one of the best ever written (thanks to the brilliance of Nicholas Ray) because of the notion that the best explanation for one’s erratic behavior is that there is no explanation.

Rebel Without a Cause is a tough film to watch because of its gripping drama, yet it is a film that will always be its own unique entity.  A fun fact is that this film is part of the plot of La La Land (2016)m even though the Rialto theater has been closed down since the release of that beloved musical.  Nevertheless, change is the only constant, and sometimes rebellion is necessary in order to promote change in a dynamic world.

Rebel Without a Cause (1955) Bonus Drinking Game

Take a Drink: for every violent act

Drink a Shot: for every gun shot

But Drink Carefully: because alcoholism can increase one’s chances of “rebelling without a cause” (but seriously, please drink responsibly)