One Flew Over the Cuckoo’s Nest (1975) Movie Review

… one flew east, one flew west,

One flew over the cuckoo’s nest

And so begins the literary classic that had a film adaptation that are both universally even though the film premiered 45 years ago (as of 2020) in 1975.  Ken Kesey might have published One Flew Over the Cuckoo’s Nest in 1962, but the novel and the 1975 feature film have left indelible marks on literature and cinema while also being hailed as American classics. 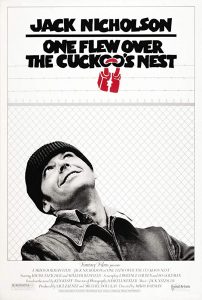 One Flew Over the Cuckoo’s Nest remains one of the most iconic and critically acclaimed films of all time.  It originally held a record as one of the films with the most Golden Globe awards (six to be exact) until La La Land (2016) shattered that record in 2017.  One Flew Over the Cuckoo’s Nest might not have enjoyed a “clean sweep” at the Academy Awards, but it did win the “Big Five” awards, which are: Actor, Actress, Screenplay, Director, and Best Picture.  Jack Nicholson’s Oscar-winning role as Randle Patrick McMurphy is arguably his best because he is the perfect embodiment of Ken Kesey’s literary protagonist.  Louise Fletcher definitely deserved the Best Actress awards that she had acquired because she is authentic, terrific, and terrifying as Nurse Ratched.  Her performance can even be compared to when Kathy Bates’s won an Oscar for scaring audiences in Misery (1990).  Overall, this film is one of the key examples of an adaptation of an American literary classic into an American cinematic classic. 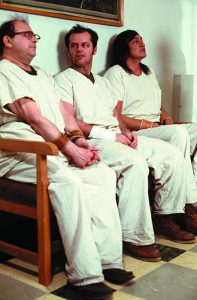 The plot of One Flew Over the Cuckoo’s Nest itself is accessible because of its simplicity, yet it delves deep into psychological complexity.  Both the novel and this film employ comedy and tragedy to question the nature of reality and (in)sanity (not to mention the fundamental conflict between what really is good and what really is evil).  Ken Kesey’s contribution to contemporary literature (and this famous film) will definitely stand the test of time as much as the children’s folk rhyme that inspired its title. 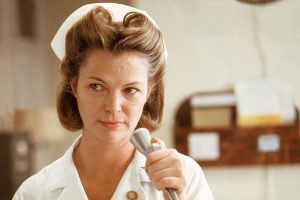 One Flew Over the Cuckoo’s Nest (1975) Bonus Drinking Game

Take a Drink: every time R.P. McMurphy delivers a line that is both comic and crude

Drink a Shot: every time Nurse Ratched acts like an “effin B-word”

And Drink Yourself Silly: every time the word “crazy” is spoken (but do not drink too much, please, or else a viewer could fly over the cuckoo’s nest, too!)