It’s January so it’s dumping time at your local multiplex! Time for major movie studios to unload their write-offs in the hopes that consumers whose brains are still liquefied from the holiday craziness and/or Cats, won’t be too picky about their entertainment choices.

Enter the first major comedy of the ‘20s, Like a Boss starring Rose Byrne, Tiffany Haddish, and Salma Hayek.

Mia (Tiffany Haddish) and Mel (Rose Byrne) are lifelong best friends, roommates, and co-owners of a cosmetics company called Mel and Mia’s. Business hasn’t been so good for awhile and the company is in quite a bit of debt (somehow even though they net $21K a month, they are nearly half of a million dollars in debt…). 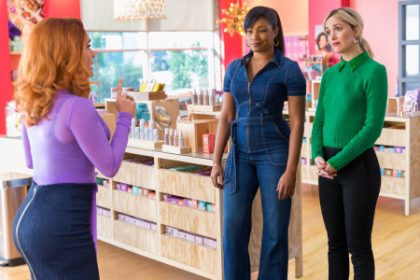 It seems like a miracle when beauty industry mogul, Claire Luna (Salma Hayek) expresses interest in the company and offers to bail them out of debt and add their products to her multi-million-dollar empire. Claire agrees to the negotiated terms of 49 percent of the business, allowing Mia and Mel to retain majority of the ownership. But she has an evil plan – MUHAHAHAHAHAHA –to split them up and gain control of the company.

This film is full of A-list talent known for their comedic abilities. Rose Byrne and Tiffany Haddish have both been standouts in other films. Here they have a believable chemistry and work well off each other. Salma Hayek, decked out like a comic book villain with a wig, contacts, and fake teeth, is enjoying herself, and that’s nice because she’s earned that, even if it is a thankless role. The supporting cast is filled with top-notch funny people including Jennifer Coolidge, Billy Porter, and Jessica St. Clair. So if you are a fan of any of these actors, well, they are in this movie.

There’s a nice message about friendship and female empowerment in there somewhere…somewhere deep, deep, down at the bottom of this mess.

This kind of film makes my head hurt. It makes me wonder how it got to this point. The point at which this thing has been made, it is being projected onto a screen, and I am taking it in through my eyeballs while my brain attempts to process it.

So someone wrote a screenplay (two people in this case) and brought it to someone else. That person read it and was like “this is great! Let’s make this!” And they show it to others who agree and invest millions of dollars into it ($29,000,000 reportedly) and get all these famous, talented people to agree to be in it. And then they shoot it, edit it, and screen it, and everyone is like “Yup! This is perfect! Release it!” And they send it out to theaters and dump millions of more dollars into marketing.

How did it get to this point? Who thought this was funny? Did they think the general movie-going public would think it was?

Just to give you an idea, here’s an example of the “humor” in Like a Boss: the two lead characters are at a baby shower and sneak upstairs to a bedroom to smoke a joint (as grown women tend to do). They realize they are not alone in the room. There is a newborn baby there with them (cue joke about a baby sleeping well because of the pot). After accidentally dropping the joint in the crib, they hear people approaching and duck out the window onto the roof over a pool. They eventually end up jumping into the pool.

There’s another “joke” that runs on way too long in which the characters accuse another female of having a penis and the women denies it repeatedly. Not only is the original joke not funny, it’s 2020 and this kind of humor has been long dead for decades.

The big “comedic” (yeah, I’m just going to continue to put quotes around words like comedic, humor, and joke because while that was the intent, that is certainly not the result and I want to be sure that is not misunderstood) set-piece involving ghost peppers seen in the trailer seems like something that was added in at last minute to try to get an easy laugh. (It doesn’t.)

I laughed exactly once, during a scene featuring Billy Porter making a dramatic exit after receiving some bad news. It wasn’t funny because it was written that way, it was funny because of Porter’s comic timing and physicality.

Likewise, the few times I came close to laughing were due to the actors’ talent and improvisational skills. Byrne is a gifted comedic talent and Haddish can read a user’s manual and make it funny and they are trying so desperately hard here. It’s the little flourishes they throw into an awful humorless script that make the jokes almost work.

The film plays out like a first-draft screenplay written by a couple of stoned teenagers. It’s so lazy and unfunny it legitimately made me angry at everyone involved.

The writing feels even more atrocious than it probably originally was due to what is clearly a botched-up editing job. Everything seems to happen at warp speed with Mia and Mel going from lifelong BFFs to mean-spirited frenemies immediately. None of these characters behave like real people. Their motivations and personalities change often depending on the “joke” that is being set up.

I suspected they were going for a Romy and Michele vibe, and by the end of the film, that’s pretty much confirmed (surprise cameo!), but it never works because these characters are unlikable and impossible to root for. The film tries to inject some heart, but by the time it does, we no longer care and it feels fake.

Did I mention this movie is as funny as a root canal? I just want to make that clear.

How I felt watching this thing.

I saw this movie two days ago and I’ve already forgotten 80% of it. There was a good idea, a talented cast, and a nice message, but it fails on every level. If you’ve seen the trailer, then you’ve already seen the few (sort of) funny parts. Between the poorly written, unfunny screenplay, and sloppy editing , this one is a huge misfire and the worst kind of bad movie. Avoid.

Take a Drink: whenever a character does

Take a Drink: whenever anyone makes a joke about Salma’s Hayek’s character’s appearance

Take a Drink: for every genital reference or “joke”

Take a Drink: whenever it is obvious that someone is ad-libbing

Do a Shot: for every karaoke scene (pointless and unfunny)

Pour one out: for the money that you wasted if you actually go to see this mess