Many would consider La La Land (2016) to be the best movie ever made.  Part of the brilliance of this Best Picture nominee is how Damien Chazelle celebrates the musicals from cinematic history while offering a reality check about how the real world is NOT a glamorous Hollywood production.  Of course, musicals from earlier eras do contain a lot of fantasy, and one of the most visually stunning musicals ever made is Brigadoon (1954). 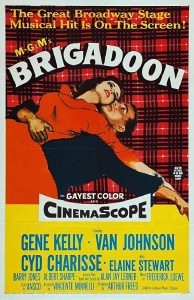 Like many classic musicals, this film features beautiful production design, cinematography, and costumes.  Gene Kelly and Cyd Charisse form an ideal romantic duo comparable to Ryan Gosling and Emma Stone.  The dance routines that the two main stars share in Brigadoon are spectacular because Fiona’s (Charisse) dresses appear to sway with the music in a way comparable to how Emma Watson’s golden ballgown moved during the ballroom scene in Disney’s live-action remake of Beauty and the Beast (2017).  And of course, Alan Jay Lerner and Frederick Loewe have a compelling musical score and composition even though some would say that their best musical is My Fair Lady (1964). 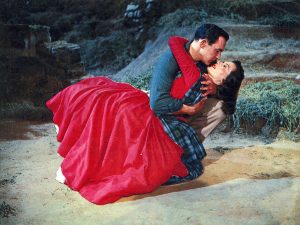 Despite all of the beauty within this film, there is still a very distasteful moment.  A glamorous woman can be seen smoking at one point in this film, and this unfortunately makes smoking look beautiful even though it isn’t.  *Please be aware that Brigadoon was made in the 1950s, which is way before people knew about the dangers of smoking.*  Nevertheless, it actually is a bit of a shame how media can sometimes glamorize bad behavior, which is why many films and TV shows advise viewer discretion. 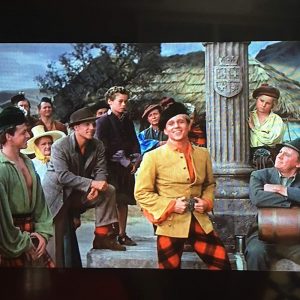 Brigadoon is a classic example of Hollywood fantasy, while La La Land juxtaposes fantasy and reality to reveal that the real world is not “La La Land”.

Take a Drink: for every lavish musical number

Drink a Shot: every time characters speak with Irish accents

And Cheers: to the Oscar-nominated production design and costume design that makes this film look fantastic (even though it really is just a fantasy movie)