Brahms: The Boy II picks up not too long after the events of the first film (2016’s The Boy). That old creepy mansion has since been purchased by a real estate developer. The guest house (wait, what? Guest house? –Yes. Apparently there was a small not creepy guest house on the premises adjacent to the mansion) has been sold to a family: mom Liza (Katie Holmes), dad Sean (Owain Yeoman), and young son Jude (Christopher Convery), looking to leave the big city for a more secluded and safer (lol) place to live after a harrowing home invasion that left Liza traumatized and Jude so disturbed that he has been unable to speak since.

During a walk in the woods Jude happens upon an old porcelain doll that looks suspiciously like Jared Kushner. Despite this, he opts to keep the dirty tattered thing. Liza and Sean are justifiably weirded out by the toy, but what’s the harm? They change their stance when to their delight, Jude bonds with the doll and even begins to speak again—though only in private play sessions with Brahms. Who is Brahms? That’s the doll’s name. How does Jude know that? Brahms told him. 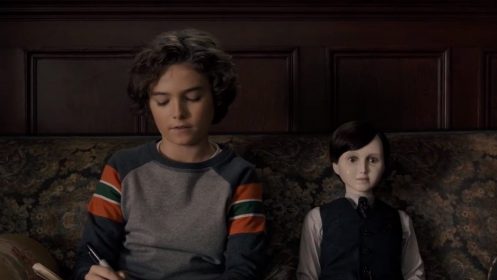 Still, the concerned parents encourage the odd friendship as it seems to make Jude happy and come out of his shell. That is until strange and disturbing things begin to happen…

I hadn’t seen the original film until only a few days before the sequel. I wasn’t expecting much more than just another possessed doll movie a la Child’s Play and Annabelle.  But I was pleasantly surprised by the quality of The Boy. The acting, visuals, and writing were far above other films in the genre and it kept me guessing until the very end, with a brilliant final twist that I admittedly did not see coming. Knowing what I knew about the original (though it is revealed in the sequel, I will not spoil it because it is most certainly worth a watch), left me with many questions about how a follow-up movie would be approached. More on that in a bit.

First: the good. As in the first film, the cast goes above and beyond, particularly Katie Holmes and Christopher Convery. The horror element aside, both actors turn in compelling dramatic performances as a mother and son coping with the aftermath of a traumatic event. The supporting cast, which also includes Ralph Ineson as the groundskeeper named Joseph, who may just have some secrets, are all very good as well.

Lack of character development is often one of the biggest mistakes in horror films. After all, the audience needs to care what happens to these people to up the stakes. Director William Brent Bell and writer Stacey Menear once again take great care to give viewers fully three-dimensional people to root for and I appreciated that.

There are a few genuinely creepy moments and a couple pretty good scares. Few and a couple, yes, but that’s still better than a lot of entries into the genre I suppose.

For all the goodwill the first film built up as a finely crafted, effectively spooky, and an entirely original take on what at first seemed to be a predictable concept, the sequel shatters it all like a croquet mallet to a porcelain doll.

The Boy II retcons everything we knew about Brahms and attempts to expand the world of the doll in ways that are puzzling and angering, while opening up multiple plot holes. It backtracks on everything that made the first film so creative and surprising and essentially becomes exactly what many expected the original movie to be.

Though a sequel seemed like an odd choice given the big reveal at the end of The Boy, it wasn’t an entirely unreasonable idea, if done right. And it was understandable, the first film was a minor hit and Brahms’ perfectly chiseled, creepy blank face is a fitting addition to the horror genre’s toy shelf. But the direction the sequel takes is uninspired and lazy, as if the studio wanted to cash in on the entity and brought on a new writer and director to crank out a follow-up. But that isn’t what happened. This film has the same creative team behind it, which makes it all the more disappointing.

Fans of the first film will likely spend much of the length of the second trying to figure out how it all fits together. When it is finally explained, it doesn’t make a whole lot of sense.

When properly paced and constructed, jump scares can be an effective device in horror. When not and used too often, they try on the audience’s patience. There are a couple decent jump scares in Brahms: The Boy II (the best being Katie Holmes yelling “BOO,” which pretty much should tell you everything you need to know), but the movie is far too reliant on them and they become more and more predictable as it goes on.

While the original was chilling in its ambiance and claustrophobic setting (which is pretty impressive, since it took place in a huge mansion) combined with excellent pacing, the sequel makes little attempt to slowly build the dread, instead showing all its cards immediately and blatantly. It takes the obvious and easiest route at every turn, which again, is super disappointing. And though it clocks in at only 86 minutes long, it often drags and feels much longer.

Fans of the first film may feel the need to check in on what Brahms has been up to and if you are one of them, be warned that this may retroactively tarnish the memory of its much better predecessor. What a bummer of a sequel this was!

Take a Drink: whenever anyone says “Brahms”

Take a Drink: for every nightmare fake-out

Take a Drink: whenever the rules are mentioned

Take a Drink: when Liza FINALLY researches the history of the doll and the estate online

Take a Drink: every time something happens that makes the first movie make less sense

Do a Shot: for every jump scare