Bombshell tells the true story of the sexual harassment scandal that rocked Fox News and led to the ouster of its CEO, chairman, and disgusting blob of human excrement, Roger Ailes. (May he rest in peace.) (Not).

Directed by Jay Roach with a screenplay by The Big Short’s Charles Randolph, Bombshell covers the events between 2015 – 2016 when former anchor Gretchen Carlson (Nicole Kidman) sued Ailes (John Lithgow) and exposed the toxic behind-the-scenes workplace environment at the network. Dozens of women joined her with their own stories, including one of the network’s biggest and most controversial stars, Megyn Kelly (Charlize Theron).

This film is worth seeing for the make-up/prosthetics alone. I must have watched the first trailer (you know, the masterfully edited one with the three leads in the elevator?) at least ten times in a row when it was released to be convinced that was actually Charlize Theron and not Megyn Kelly herself. While viewing the film, I had a similar reaction when I realized that John Lithgow was playing Roger Ailes. The transformations are incredible and I hope the amazing work of the artists involved is recognized this awards season. 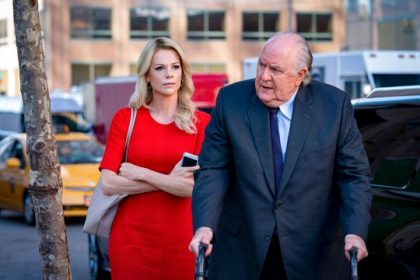 But without a skilled actor to accurately get every little nuance of a real-life person down, make-up is only, well, skin-deep. And this is where we raise a toast to the incredible shape-shifter, Charlize Theron. As if there was ever any doubt that she would be anything less than flawless. Like her Oscar-winning turn as Aileen Wuornos in 2003’s Monster, Theron disappears and morphs into Kelly in speech, posture, and mannerisms. 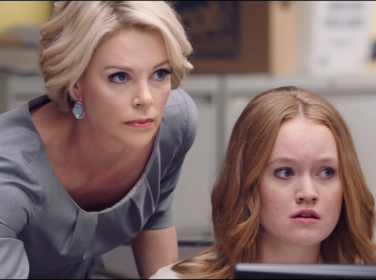 Nicole Kidman as Gretchen Carlson does as well, though to a lesser extent – I never really forgot that I was watching Kidman, but that isn’t to say her performance isn’t excellent. (Again, there’s really no such thing as a Nicole Kidman performance that isn’t great.)

Margot Robbie rounds out the phenomenal lead cast and plays Kayla, a fictional composite of multiple real-life Ailes accusers. As the young, naïve, aspiring tele-journalist and the film’s most sympathetic character, Robbie turns in the second of two awards-worthy performances this year.

It’s a treat to see three of the most talented working actresses in Hollywood in one film, and they each dissolve into their characters and play off each other brilliantly to tell a compelling story.

John Lithgow’s portrayal of Ailes is so slimy and gag-inducing (appropriately), that it’s easy to forget you are watching a performance. So much attention has been placed on Theron, Kidman, and Robbie, that his work in the film is not getting a lot of talk, but it deserves to. 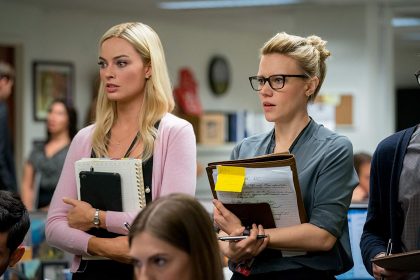 There are several familiar faces in the supporting cast, most notably Kate McKinnon, who adds a bit of comic relief, but also gets a chance to show a more dramatic side we don’t often get to see from her. (Hopefully this will lead to an Uncut Gems-esque showcase for McKinnon in the future.)

The film feels like we the viewers are getting a peek into the inner workings of Fox News and like the transformations of the characters, the design of the building and on-camera sets is extraordinary and realistic.

While the film moves along at brisk pace and is never boring, the structure is a bit disjointed at times, and the tone shifts. Often it feels like Roach is going for the feel of The Big Short (understandable since the two films share the same writer) or last year’s Vice. Other times it’s straight drama (the very uncomfortable and somewhat misguided Kayla/Ailes interview- why show us his perspective?).

Megyn Kelly coming forward was the final nail needed to solidify Ailes’ removal as CEO of Fox News and her decision to speak out was no doubt something that she grappled with and is depicted very well; however the film focuses a little too much on her story (likely to show off the incredible physical transformation and Theron’s acting chops) and too little on the woman who set the ball in motion, Carlson, who is quickly shifted to the background as an observer. I mean, come on, Nicole Kidman is RIGHT THERE!

I felt the need to watch To Die For after this film – still one of her very best performances.

It’s also a little tough to find sympathy for and cheer on those who, for a long time, benefited from their positions at Fox News while being completely aware and complicit of what was going on behind the scenes. This is addressed through a late conversation between Kelly and Kayla and I appreciated that, still many may feel unrepresented with yet another tale of successful, attractive, white women being championed as the leaders of the #MeToo movement. Especially someone as polarizing as Megyn “what’s wrong with blackface?” Kelly.

Bombshell is a gripping, easily digestible, and extremely well-acted dramatization of real-life events. Regardless of how you feel about the real-life people portrayed, this is not one to miss.

Take a Drink: whenever a male character harasses a female

Take a Drink: every time you forget that is Charlize Theron

Take a Drink: whenever a doughnut is visible

Do a Shot: whenever there is footage/audio of Trump

Do a Shot: every time someone says the word “bombshell”

Chug: during the interview/audition scene between Ailes and Kayla (you will need it)