James Gray’s Ad Astra, Latin for “daddy issues in the stars” or something, takes place in the kinda-near future and follows the journey of hotshot astronaut Roy McBride  (Brad Pitt) who is tasked with a mission that sounds as impossible as it does awesome. See, Roy’s father, the great Clifford McBride (Tommy Lee Jones) was a hotshot astronaut too (some may even call him a space cowboy), and he was involved in something called The Lima Project some thirty years ago, a mission far into outer — like really outer — space in search of intelligent life, but never returned. Recent surges related to antimatter released from the lost Lima vessel are threatening the entire solar system. So Roy must attempt to make contact with his father, who is believed to be still alive and causing the catastrophic surges in his delirious, unending quest to find alien life.

But it’s not such an easy thing to do, see Clifford is all the way over by Neptune. To get there Roy must hop a commercial flight to the moon, then rocket from there to Mars where he can send a message via laser transmission to his dad to convince him to come back and destroy the antimatterMcGuffin and save the Earth. (You’re probably wondering, why not just make a recording of Roy and transmit that? Why does he need to go to Mars to do this? Because movie reasons, that’s why. Okay, but maybe you’re also wondering, why bother with trying to reach the loon? The universe is at stake! Why not just destroy the source of the pulses since we later learn they have every intention and ability to do that? Because again, then there would be no mission for Roy to use as a metaphor for his internal struggles. Duh.)

Anyway, it’s a really great coincidence that the only person who may be able to get through to Clifford is also an astronaut! (Not that that has stopped non-astronauts from going to space and saving the world before. See: Armageddon.) It’s also a good thing that Roy is calm and cool, his pulse never going above 80, because he’s learned to compartmentalize his thoughts. He suppresses his emotions, likely due to his high-stress job, but really because of all the stuff with his dad going out for cigarettes, to Neptune, all those years ago.

This a film that begs to be experienced on the big screen. There are some amazing visuals. For space buffs, this is certainly a treat for the eyes. Ears too, as the sound design and score complement the gorgeous views perfectly. It sure looks and feels like an incredible achievement in film. On a surface level at least. 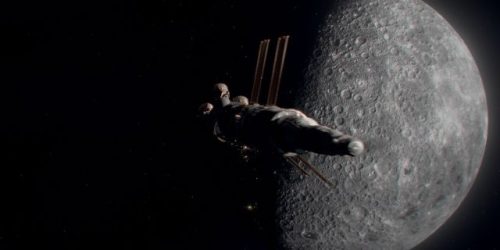 The film begins with a stomach-dropping set-piece of Roy working his day job atop a tower extending high above the atmosphere and if you have even the slightest fear of heights, it’s dizzying (I had flashbacks of The Walk, which I watched the majority of curled up in an sitting fetal position). And stunning. It’s a thrilling opening sequence. 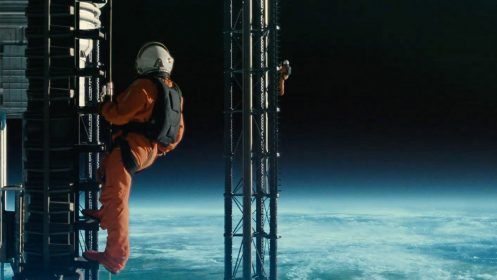 But don’t be fooled, despite the adrenaline-boosting whopper of an opener, this is a slow-burn. There’s nothing particularly wrong with that, but some viewers may grow anxious waiting for the next sequence of space peril. Patience pays off though, because they are there in spurts and they’re wonderfully insane. (Space monkeys!).

My favorite scenes are of the layover trip to the moon, which of everything that happens in this film, seems the most probable. It is, of course, a tourist attraction complete with an Applebee’s.  The set design is brilliant, and these scenes contain the few brief moments of any kind of comic relief in a film with a tone that is, for the most part, dour (How much for a pillow?) I would have been perfectly content to spend more time on the moon and skip all that Mars stuff. There’s even an intense and ridiculous (in a good way) lunar rover chase scene involving moon pirates, which feels like it’s out of an entirely different film, but damn if I wasn’t on board.

Moon Pirates:  I want to see that movie!

This film is already being referred to as a masterpiece and is receiving tons of critical praise. Maybe it’s because of all that hype that I was expecting to be floored by it, but I felt myself sitting and staring at the screen waiting for the moment that it would click and I would understand what so many are seeing in it, aside from the amazing imagery. Two hours later, it ended and I just shrugged.

The whole space adventure thing is really just an allegory for Roy’s internal journey to reconcile his feelings about his father, as well as deal with his own existential crisis. It’s meant to be deeply personal and moving, but the problem is that we never get to know enough about Roy or his father to connect with the characters on the emotional level the film wants us to. We learn exactly one tidbit about their history in the form of a line of dialogue and later a visual (they liked to watch old black and white musicals together at some point – that’s it). It attempts to build up to an emotional resolution between a father and son, or at least one between the son’s mind compartments, but it feels unearned and empty.

Likewise, the conflict between Roy and his estranged wife (Liv Tyler in blink-and-you’ll-miss her flashbacks- one that is inexplicably blurred out) is never given the attention it needs to make any kind of impact. So yeah, their relationship didn’t work out because of Roy’s preoccupation with his work, and?  I suppose that’s all we are supposed to know. (And yes, can we please, finally let Liv Tyler be the one who goes to space? She can be the hero in Moon Pirates! I’ll write the damn thing myself!) 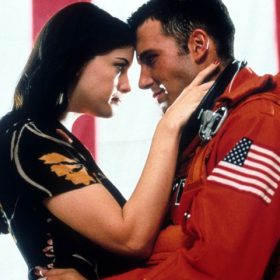 A lot is being said about Brad Pitt’s performance. There’s even Oscar buzz. He does what is required for the character, who is stoic and emotionless and often narrates his thoughts to the audience in a dry monotone. It’s good for what it is, but he never gets or takes the opportunity to do much more. 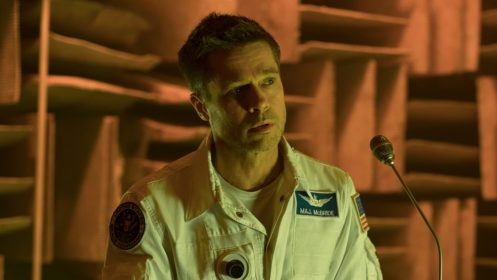 I’m so so, sorry Brad. I still loved you in Once Upon a Time in Hollywood.

Science was never my best subject, and I usually just roll with whatever a movie presents as fact, but whew boy, there were times when I just wanted to yell “Oh Come On!” in my best Ross Gellar voice.

Maybe it’s because this film was touted as “the most realistic depiction of space travel ever.” Director and co-writer James Gray recently said on a podcast that a more appropriate word would be “plausible.” Either way, there were several moments in which suspending disbelief was pretty much impossible. Gravity on the moon? An endless supply of fuel, air, and food? Traveling billions of miles of the solar system in a matter of days? Pitt’s character jumping aboard a moving rocket from underneath? Propelling a rocket with a nuclear explosion? I guess these things are plausible? (No, no they are not.)

Sorry, I don’t get the hype with this one. I toggled between giving this one more beer which would push this into the “mediocre” rating, but I couldn’t do it because this film, on a visual level, is definitely not mediocre. So I say this, if you love films that take place in space, go see this one. See it in IMAX. But don’t expect much more, storywise. It’s not nearly as profound as it thinks it is (or as many people want to think it is).

Take a Drink: whenever anyone says “surge”

Take a Drink: whenever anyone says “Lima project”

Take a Drink: every time Roy is invincible (seriously, everything happens to this guy, but it’s okay! He’s fine. He’s Brad Pitt after all.)

Take a Drink: Hi there, Natasha Lyonne! (Fun fact: she has more lines than Liv Tyler)

Do a Shot: every time Liv Tyler appears (don’t worry, you’ll be fine)

Do a Shot: SPACE MONKEYS!

Do a Shot: MOON PIRATES!