Black History Month is one of the many American traditions of how society tries to honor African-Americans despite the racial issues that continue even today in 2020.  People of color have actually been in films for almost the entirety of cinematic history, but the roles that they would play have obviously changed to reflect social progress throughout the twentieth century and beyond.  For example, films from the 1960s coincided socially with the Civil Rights Movement that happened throughout that same decade, and one of the best films from that era is A Patch of Blue (1965). 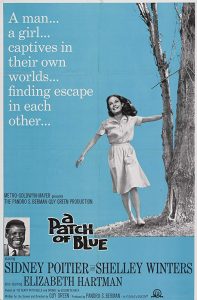 Considering the time period, and the status of America in 1965, this film really was very revolutionary.  Interracial relationships continue to receive both praise and criticism (as of 2020), but this film takes those relationships even further by making the female lead blind.  Elizabeth Hartman is phenomenal as “Selina” even though she was only 22 years old during this film’s initial release.  Part of the brilliance of her performance was that even though she had normal vision, she purposefully wore opaque contact lenses so that her performance as a blind woman would be more authentic.  She might have lost the coveted Oscar to Julie Christie for her role in Darling, but at least Hartman was lucky enough to win a Golden Globe Award for being the most promising newcomer for that year. 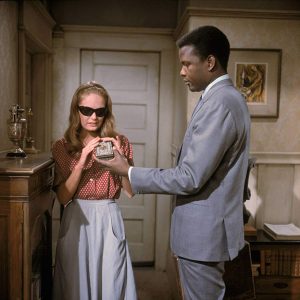 Shelley Winters ironically won her second Academy Award for her supporting role in this film even though she is nothing like her character in real life.  Winters had struggled to play a racist mother even though she fully supported diversity, but it is nice to know that she won another Oscar after winning her first one by playing Mrs. Petronella Van Daan in The Diary of Anne Frank (1959).

And of course, this film features one of Sidney Poitier’s greatest performances even though some might argue that the Academy was still a bit hesitant to honor African-American film stars given the nature of American society during the psychedelic 1960s. 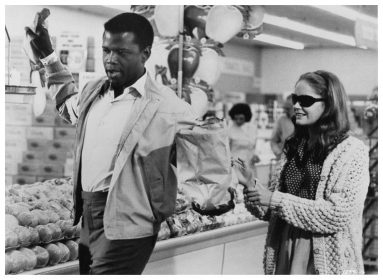 A Patch of Blue might not have achieved the same notoriety as The Sound of Music, but the title suggests that even when pessimism makes life appear bleak, searching for “a patch of blue” in the sky could offer a sense of hope and optimism despite the challenges that everyone inevitably faces daily.

Take a Drink: every time Selina is stringing beads

Double That Drink: as the musical style of this film drew inspiration from the act of “stringing beads”

And Cheers: to the groundbreaking qualities of this film that has made it endure for decades (and special cheers to Sidney Poitier himself for still being alive even in 2020)!