2016’s 47 Meters Down was a surprise hit. The originally slated-for-VOD release was picked up at the last minute by Entertainment Studios and released in theaters in the summer of 2017. Turns out audiences were hungry for a good ol’ shark thriller and the film ended up grossing somewhere between 43 and 65 million dollars (depending on the source –  on a $5M budget that’s impressive either way). Because every movie that is even modestly successful gets the sequel treatment, here we are with 47 Meters Down: Uncaged.

Once again directed and co-written by Johannes Roberts, the sequel shares the name and has a similar plot set-up to the first, but this time we are introduced to all new characters who will make the worst decision of their lives for our viewing pleasure. Once again, our two main characters are sisters, or rather step-sisters, Mia (Sophie Nélisse) and Sasha (Corinne Foxx – yup, Jamie’s daughter).  Both attend the same high school that for some reason has an Olympic-sized swimming pool in the courtyard (my high school had a stairwell we couldn’t use whenever it rained because they were afraid the roof would cave in). We quickly learn Mia is considered an outcast and a loser at school when she is pushed into the pool by the mean girl clique’s queen bee Catherine (Brec Bassinger— nope, not Kim’s daughter). Mia is so not cool, even Sasha doesn’t want to be associated with her. We never learn why no one likes Mia, she seems perfectly normal and doesn’t even wear glasses or her hair in a ponytail, but that’s all we need to know.

Mia and Sasha live in Mexico where Mia’s dad Grant (John Corbett) leads a research team currently excavating a sunken Mayan city. The girls’ parents (Nia Long picks up a quick check as Sasha’s mother) arrange a bonding experience for the new sisters aboard a glass-bottom boat to view Great White sharks. But Sasha’s friends Alexa (Brianne Tju) and Nicole (Sistine Rose Stallone- yup, Sylvester’s  daughter) have other ideas and convince Sasha and Mia to ditch the lame tourist attraction and join them to go hang out a private lagoon they found.

Two pop-song scored, tampon-commercial-esque montages of the teens having fun later, Alexa mentions that they are actually on the other side of the Mayan ruins that Mia’s father’s team is working on. She knows this because one of the researchers took her out for a dive through the first cave of the newly discovered ancient city. Alexa remembers the way and persuades the rest of the group to take one lap around the first chamber only. In and out, no biggie! There’s even a ton of scuba gear sitting right there on a raft! Mia is hesitant because no one knows where they are and cave-diving is dangerous (what a loser, right?) but on the other hand, she’s finally beginning to bond with Sasha and even making new friends, so she relents. 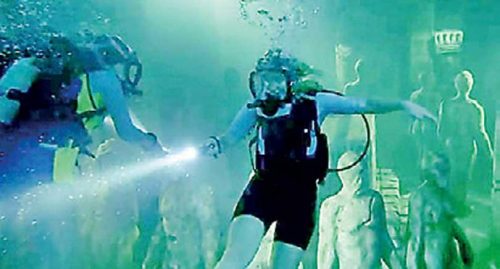 The four girls head beneath the surface and into the cave. They have those same full-face mask with speakers that allow for communication like in the first movie so we can hear their ADR  underwater conversations. Everyone’s having a great time and joking around and there are these really cool statues. But like my mom always used to say, “it’s all fun and games until you knock over an ancient Mayan column that opens an entrance for a blind Great White to hunt you while you’re trying to navigate through a dark and narrow underwater maze with your air supply dwindling.”

It takes awhile to get going as we first have to meet our characters, who are pretty paper-thin, but hey, character development is not why we’re here. Once the girls get to the remote location and into the conveniently placed scuba gear, it’s on.

Once again, we the audience are placed deep down into the ocean (not sure if this time it’s exactly 47 meters though) along with the characters to experience the dread and fear with them. We know that moment is coming when the fun stops and the panic starts and Roberts plays with the audience in getting there, making us a little more uncomfortable by the moment (in the way that you want for a film like this). The tight crevices the girls must swim through is enough to make anyone even slightly claustrophobic squirm. Like in the first, the race against time adds another obstacle as the ticking down percentage indicator of their air tanks is an even bigger threat than the hungry sharks. 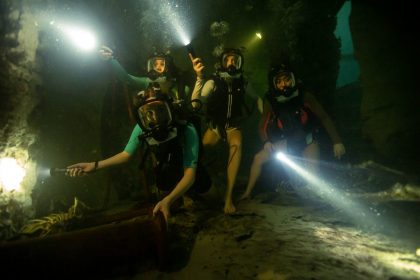 There’s a standout underwater scene set to “We’ve Only Just Begun” by the Carpenters, which now solidifies a Johannes Roberts trademark of water/music/horror mash-up sequences (His Strangers: Prey at Night also contained one, which is pretty much the only thing I remember about that movie).

The last act amps up the thrills to ludicrous, and often comical levels, but damn if I didn’t have fun.

One of the things I liked most about 47 Meters Down was that the sharks behaved like actual sharks rather than movie monsters. Sure, if given the opportunity, they’d chomp on some tasty humans, but they weren’t these vengeful and calculating villains, they were just…sharks. In Uncaged, Roberts abandons this idea and goes full-on Jaws and at times, even full-on Sharknado, which provides a few fun jump scares (and laughs). The main shark is blind, so there’s a lot of sniffing out prey and banging into barriers. It’s exciting, but in a cheaper way than the more realistic original.

The murky underwater setting often makes for some tough viewing. The darkness and bubbles, combined with quick cuts make the action hard to follow and it’s often difficult to tell who is who (an easier task in the original when there were only two main characters). There’s also a lot of tight-shots that make it hard to get an understanding of the layout of the already confusing maze-like setting. 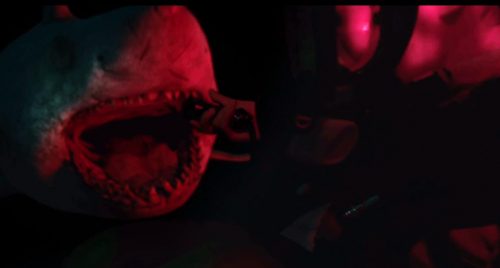 Look, you know exactly what you’re getting into with this one. If you aren’t yet burned out on shark-themed entertainment between Shark Week and twenty-something Sharknado sequels, go for it. It’s the Jaws 2 of this (what I assume will be a) franchise, not as good as the first, but a decent successor.

Take a Drink: whenever a character says how much air they have left

Take a Drink: whenever the shark appears

Take a Drink: whenever the characters think they’re safe/saved

Take a Drink: when they’re not

Take a Drink: whenever the shark tooth is shown

Take a Drink: every time Nicole does something stupid and selfish

Do a Shot: for every kill