I knew of The Last Full Measure well before I first saw a preview, since it was slated to come out last year, but got unceremoniously shunted off to this January’s dumping ground.  When I did see that preview, I had no idea what it was for, but all the recognizable stars sure had me intrigued. 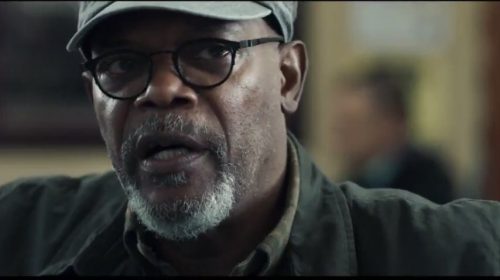 The Last Full Measure is about the 30 year effort to get Airman William H. Pitsenbarger Jr. his well-deserved posthumous Medal of Honor, focusing on jaded career bureaucrat Scott Huffman’s (Sebastian Stan) taking over and eventual identification with the cause.

First off, this film deserves kudos if only for bringing the truly heroic story of Pitsenbarger’s sacrifice to a wider audience.  His refusal to leave a hopeless situation until he evacuated and helped as many wounded men as possible cost him his life, but saved many others.  The film ultimately does manage a couple goosebump moments when justice is truly done.

Director Todd Robinson delivers a relatively compelling procedural drama as well, as Huffman runs up against unexpected roadblocks in trying to uncover the full story of both that fateful day and why he was denied the Medal of Honor in the first place.  It’s unclear how much of this has been simplified for dramatic stakes, but it still provides dearly needed conflict for the present-day scenes.

Finally, it’s hard to go too wrong with such an absurdly stuffed cast.  Jackson, Stan, Bradley Whitford, William Hurt, Christopher Plummer, Ed Harris, and Peter Fonda in his final film role all bring their own unique elements to the proceedings. 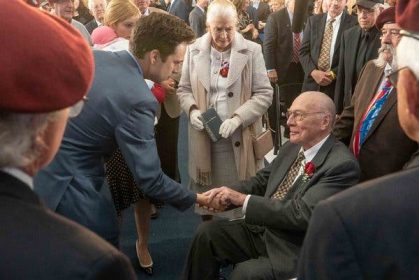 The principal issue with Robinson’s approach is that the editing drains the momentum of the film, especially the many cuts back to the battle scene.  Maybe putting it near the end as a single uncut scene would have worked better.

The fighting itself is clearly shot in one day in one stretch of California forest- it’s not compelling enough to deserve the amount of screentime it gets since the majority of the scenes all play out the same- explosion, squib spray, man falling out of tree, cut to bodies, explosion. 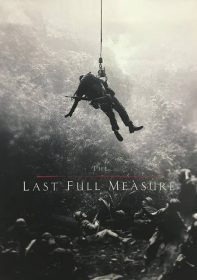 The worst effect of this approach is that the emotional stakes are also not allowed to build naturally- so the melodrama gets amped in scenes like the obligatory folded flag arriving at the doorstep of his girlfriend and parents, or John Hurt’s breakdown in front of (of course) the Vietnam War Memorial.

The Last Full Measure is a well-intentioned but awkwardly paced and presented film about a Vietnam War hero and the people who fought to get him his due.

Take a Drink: whenever we cut back to the Vietnam War

Take a Drink: whenever a new (famous) brother in arms is introduced

Take a Drink: whenever Bradley Whitford acts like a weasel

Do a Shot: when everybody stands up

Last Call:  Stick around for some interviews with the real people this film is based on, which may honestly be the most compelling part of it.  Maybe this would have been better off a documentary?