Cecilia (Elizabeth Moss) is in a controlling and abusive relationship with an optics genius. One night she drugs him and escapes with the help of her sister. She finds refuge with her friend James (Aldis Hodge) a cop with the San Francisco police department. Two weeks later Adrian has apparently committed suicide and left Cecilia 5 million dollars with the contingency that she doesn’t commit any crimes or is not deemed mentally incapable. Soon after, though, Cecilia starts to think she sees Adrian as if somehow he has found a way to make himself invisible to torture her.

Taking a story that has been retold multiple times and make it feel new or give it a new breath, is an impressive feat. It’s why I loved last year’s Little Women so much. Greta took a story everyone knows but give it a fresh take, injecting it with a shot of adrenaline and making it relevant for 2019 with its feminist themes. This is exactly what Leigh Whannell has done with this classic Hollywood story, taking the story of The Invisible Man and making it relevant for 2020 by using themes of #MeToo.

It’s not Adrian’s story this time, it’s Cecilia’s story of abuse and how she will escape that relationship and the eventual abuse that follows after the relationship has ended. With Hollywood and the rest of the US starting to understand the systems that have allowed the abuse of women to fly under the radar and working on ending these systems, it’s important to have stories like these to show the new direction we as a society are headed and to help as some type of catharsis as we ensure we have better environments, work and otherwise, for women.

With this being Cecilia’s story, Elizabeth Moss really knocks this film out of the park. The scenes in the film when she is alone, she really feels alone. Having to act terrified across from nothing is no easy act. She goes through the entire gamut of emotions; every emotion feels real, which makes some of the scenes in the film absolutely horrifying. Elizabeth keeps delivering great performances one after another and it’s only a matter of time before she wins an Oscar. Also, I want to give a quick shout out to Aldis Hodge; his role is small, but he makes the most of it. I hope he starts to get bigger roles eventually.

I had a few problems with the film, first, the special effects of Adrian in the suit in a sequence in the rain look like no person I’ve ever seen walk. It looks like when you’re playing COD online and the internet is lagging. It was choppy and unnatural and it took me out of the movie. Also, the actress that plays Cecilia’s sister was so stilted and stiff it really helps the movie that she is barely in the film. 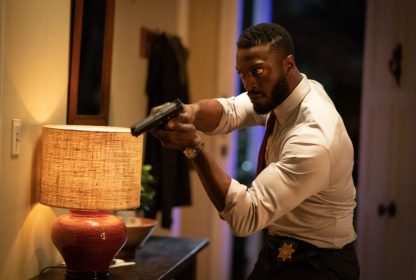 The more I thought about the film the more plot holes I kept thinking about. My wife and I discussed a few on the entire drive home, never coming to a conclusion. I don’t want to get into them in this review because I don’t like to spoil movies, but there are some large holes hiding in the plot of this film. 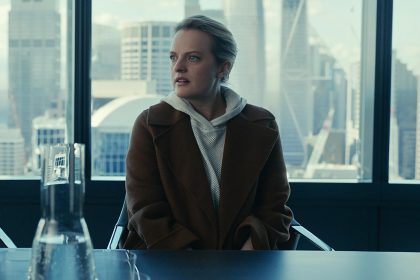 With all its faults, The Invisible Man still provides genuine scares, and is a great story about abuse and finally getting free of an abusive relationship. It’s not the best horror film I’ve ever seen, but it’s still worth a watch.

Do a Shot: every time people think Cecilia is crazy.

Take a Drink: every time someone is killed.

Do a Shot: for every plot hole you realize.

Take a Drink: every time the camera pans to an empty space.