Based on true story, a group of friends gets together one month out of every year for an ongoing game of tag. 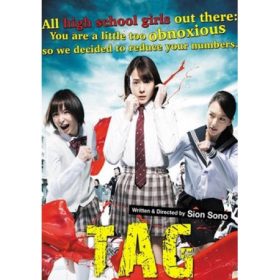 Hoagie (Ed Helms), Callahan (Jon Hamm), Chilli (Jake Johnson), Sable (Hannibal Burress), and Jerry (Jeremy Renner) have been playing the same game of tag every year since childhood. During the month of May (the designated “Tag Month”) they do everything from don disguises to take jobs at another’s place of employment, and risk life and limb simply to tag another player “It.” There are no winners, just one unlucky loser: the last It when the clock strikes 12AM on June 1st. One player has never lost in the 30 years the group has been playing their annual game: the super elusive Jerry, who has stealth-like skills, including, apparently, the ability to disappear.

The gang, along with Hoagie’s super-competitive and slightly psychotic wife, Anna (Isla Fisher) and an intrigued Wall Street Journal reporter (Annabelle Wallis) to help, decide this is going to be the year they finally get Jerry. And they have the perfect plan. Jerry happens to be getting married at the end of May! Despite the other four men supposedly being his closest friends, Jerry didn’t invite any of them to attend due to the date being in May (though we learn later that addendums could be made to their official rules- yes this is stupid). 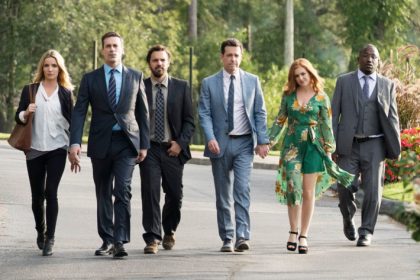 Like this year’s earlier Game Night, Tag features a great ensemble cast composed of funny, likable actors who work well together and do the most possible they can with the material. The MVPs are Isla Fisher (always a highlight) and Hannibal Buress, whose delivery of random deadpanned lines are the only times I ever broke a smile.

I liked the attempted message of the movie (which gets muddled and overshadowed by the ridiculous stunts) about holding on to and making time for friendship and growing up vs. growing old blah blah blah. It’s sweet. Too bad it’s never effectively communicated.

That is, until the very end of the film, when there is a montage of clips of the group of men who inspired the film. These clips are funnier, more entertaining, and more touching than everything that came before and it left me wishing I got to see more of that instead of the overly heightened, movie star-studded, fictionalized version I just sat through. Here’s hoping the movie is successful enough for a Netflix documentary about the real-life men to come out of it. 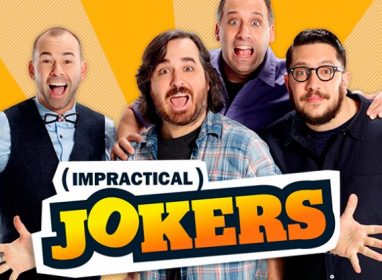 Because often, real-life is better than anything Hollywood can come up with.

Finally a shout-out and toast to the music supervisor. Every chase scene is accompanied by a song out of the 80s/90s and the selection is wonderful. From Beastie Boys’ “Shake Your Rump” to Danzig’s “Mother” to the freaking Crash Test Dummies’ “Mmm Mmm Mmm Mmm,” each was a welcome surprise.

The early to mid 90s was a weird and wonderful time.

I feel like every recent review I’ve done for a comedy (with the exception of Blockers) contains the sentence “it just isn’t funny.” Sorry to be a broken record, but I don’t understand why it is so hard to make a decent comedy lately. Is it laziness? It seems most recent entries in the genre rely on either a stacked cast or high concept (in this case, both) to carry a movie. Yeah, that’s a good start, but then there’s this thing called effort that you also need. That includes a well-written screenplay containing fully-formed ideas and a consistent tone. This movie has none of those things.

It’s hard to fill an entire feature-length film with a one-note idea and it shows, wearing thin only a half hour in. I was happy when a character mentioned the date was May 30th because that meant Tag month (and the movie) was almost over. 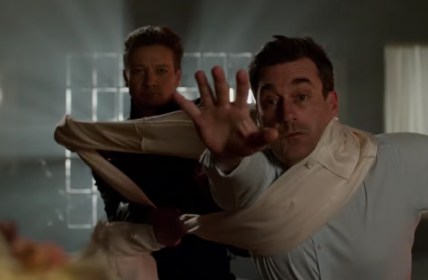 The chase scenes are all shot in that highly-stylized, slow-mo then sped-up action and feature voice-over narration by Renner. The first, oh, two, three, times are kinda, sorta, humorous, but then it just gets tiring. Each ones attempts to amp up the absurdity to Looney Tunes levels, but it’s nowhere near as fun as the movie seems to think it is.

Again, what saves these scenes for me, is the music.

The character of Rebecca puzzled/frustrated me. She’s introduced as kind of a stand-in for the audience, constantly asking other characters what’s going on. And then she sticks around for all the hijinks (and often criminal activity), at one point even joining in to help the gang. She travels cross country with them for days to get some big story without even stopping to purchase a change of clothes. 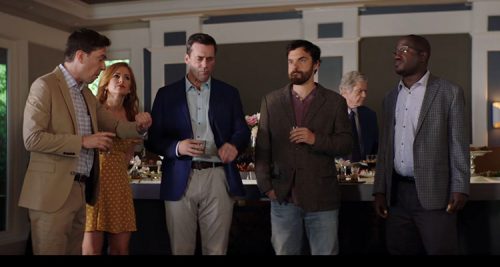 Maybe she’s in the bathroom?

She’s not the only character who seems oddly shoehorned in to fill up the runtime. There’s a bartender (Steve Berg) who desperately wants to join the game. The film comes back to him several times and then just forgets about him. Then, there’s a completely wasted Rashida Jones as a former girlfriend of both Callahan and Chilli. She saunters in now and then to create tension in the group and then, well, that’s kind of it. Nora Dunn plays Hoagie’s mother and pops up a couple times to weirdly flirt with Chilli and… again, pointless. All set up and no conclusion. Kind of like an unfinished game of tag!

Without going into spoilers, there’s a last minute 180 degree turn into serious/sentimental territory (as is par for the course in movies like this) and it’s supposed to be touching but it’s such a huge blow of a downer, it kills any ounce of fun that leads up to and after it. Now, I don’t know if this plot point was based on the true events that served as inspiration (from what I have been able to gather, most of the film is fictionalized using only the story of the men playing a lifelong game of tag as the main concept), but geez, what a buzzkill. And there wasn’t much of a buzz to kill in the first place so we really needed to hang on to any buzz we can get.

This is the opposite of “a lot better than it deserved to be.” It should have been better than it was. You pretty much already saw this movie if you saw the trailer, except for the major bummer of an ending.

If you’re looking for a high-concept comedy featuring an ensemble of talented actors playing a game, then rent or stream the much better Game Night.

Take a Drink: whenever someone is tagged (but you never guessed that one!)

Take a Drink:  for every flashback

Take a Drink: whenever Chilli gets high (skip this one if you actually want to see the entire movie)

Take a Drink: whenever Rebecca asks someone to explain what is going on

Take a Drink: whenever Rebecca disappears/reappears

Take a Drink: for every slo-mo chase sequence (chug when they become tiresome)

Do a Shot: for every action that would result in death/paralysis in real life

Do a Shot: at every chase scene accompanied by an awesome song from the 1980/90s

Finish your Beer (And have another.  And then go call your friends you haven’t talked to in awhile): for the downer of an ending