It was a little depressing to see the once great Zhang Yimou stray dangerously into blockbuster nonsense with the nicely color-coded but otherwise garish CGI nonsense of The Great Wall. 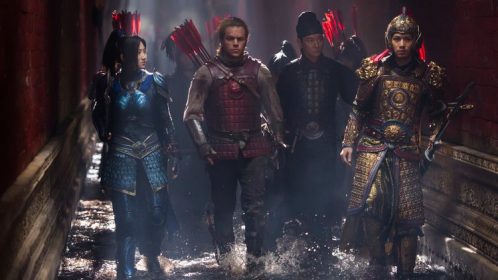 Something looks out of place here.

Well, I’m happy to report that Yimou is returning to the Chinese costume drama epics that he delivered so well with Crouching Tiger, Hidden Dragon and Hero.  The plot of Shadow isn’t terribly far from those films- a kingdom who reluctantly allied with an age-old enemy to defeat a joint foe finds itself under its thumb.  The headstrong general who appears quite miraculously healed from the near-fatal blow dealt by the enemy’s champion wants a rematch, whether or not it will draw his kingdom back into war against his king’s wishes.  Twists, betrayals, court intrigue, and bloody violence ensue.

Unlike the color-coded mixed palette that Yimou became famous for working with, he’s thrillingly subdued here- working only in black and white and greys and delivering an ancient landscape painting aesthetic that is uniquely Chinese and just as beautiful as his thrilling reds and greens in other films.

He uses other hallmarks of Chinese period pieces as well, from the thrilling zither score (and in-film zither showdowns), to less traditional but complimentary black and white costuming and set design, all evoking an era both through direct reference or atmosphere and feeling.

Yimou also exhibits a sly feminist angle, less overt than other works but no less powerful.  Even the book-ending beginning and end scenes make an interesting point about agency and respect once you realize why he chose to begin and end his film this way- he hasn’t lost his intriguingly subtle touch.

The plot and filmmaking style all privilege fluidity, flexibility, and creativity over power and scheming and brute force- there’s a moral here he’s trying to convey despite all of the still quite engaging surprises and doublecrosses and blood-spurting action at the end.

Warning: this film starts very slow.  All of the good stuff takes a solid 45 minutes at least to get to.  The design aesthetic only takes you so far in the beginning, and it’s hard to argue that snipping about 15 minutes of it would have done anything but improved the film.

The other separator for audiences with this film are the I’m sure very intentionally heightened, even shrill performances.  I think they’re a direct reference to Chinese theater, but let’s just say… this is an artform that certainly isn’t for everyone.

Shadow is a return to wuxia form for Zhang Yimou, if not quite ranking among his best films due to some polarizing stylistic choices.

Take a Drink: for umbrellas

Take a Drink: for duels and practice for duels

Take a Drink: for arguments about peace treaties

Take a Drink: for zither performances

Do a Shot: for dire insults