From the director of the critically-reviewed Paul Blart: Mall Cop 2, comes the latest family-friendly zany comedy featuring a big muscly guy having to deal with pesky kids. 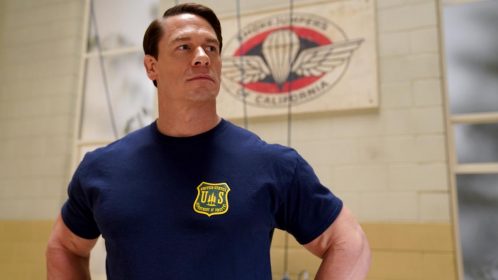 Playing With Fire stars John Cena and John Cena’s veins as Jake “Supe” Carson, a smoke-jumper (don’t call him a firefighter!) and supervisor (hence, “Supe”) of his department whose singular goal in life is to become the commander of all the smoke-jumpers or something, just like his father. He’s so strait-laced and career-focused that he has no time for dating and doesn’t even know any songs that don’t mention fire. 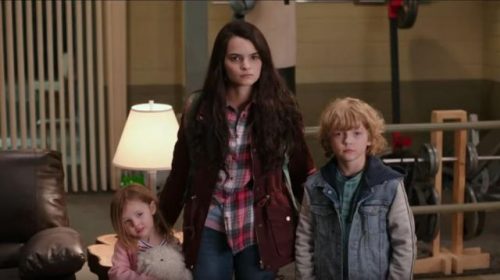 Jake’s life is turned upside-down when he and his loyal crew, Mark (Keegan-Michael Key), Rodrigo (John Leguizamo), and Axe (Tyler Mane) rescue three children from a burning cabin. There’s teenage Brynn (Brianna Hildebrand), who wants to be treated like an adult and feels she is responsible enough to care for her younger siblings (despite, you know letting the cabin burn down and all), Will (Christian Convery), who just can’t seem to stay out of trouble (likely the culprit of the fire if you want my opinion), and adorable little Zoey (Finley Rose Slater) who loves ponies and produces lethal projectile diarrhea.

After the kids are brought safely to his station, Jake discovers that their parents are out of town and he must take care of them. With help from Mark, Rodrigo, and Axe (who apparently have no personal lives of their own) the tough smokejumper must deal with his toughest job yet!

It’s hard not to like John Cena. Since graduating from the Dwayne Johnson School for Wrestlers Transitioning Into Movie Stars, he’s consistently been a bright spot in comedies like Sisters, Trainwreck, and Blockers. He’s charming, self-deprecating, and funny. Like in those other films, he holds his own against more seasoned comedic actors, in this case Keegan-Michael Key, John Leguizamo, and Judy Greer (as Dr. Amy Hicks, a scientist who really, really, really likes frogs toads).

Speaking of Greer, here’s a toast to her finally playing the love interest. Not the wisecracking best friend. Not the cunning rival. The actual leading lady. Unfortunately it’s in this movie, but hey, you gotta take the little victories.

Despite being packed with talented funny people trying their damndest to do what they can with the material, this movie is not very funny. It’s going for slapstick cringe-humor, but never quite works the way it is intended. It gets off to a good start with a few laughs in the opening scene, but once the kids show up, it’s just one predictable pratfall after another, with several poop jokes thrown in. 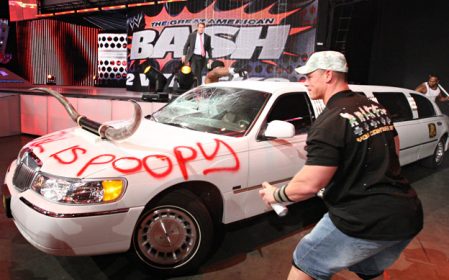 Fortunately, Cena has plenty of experience with poop jokes from his days in the WWE.

The MVP of Playing With Fire is Keegan-Michael Key who fights to pull what he can out of what feels like a made-for-TV Nickelodeon film. It’s quite admirable. And kind of sad.

No one in this film, child or adult, acts like a real person.

We first meet the kids while they are sitting on the floor of the burning cabin and they immediately start with the wisecracking while in the process of being rescued. When safely back at the station, they immediately begin destroying everything and complaining. Uh, you almost died and these people are helping you. Maybe the younger kids wouldn’t realize that, but you’d think the teenager (played by a 23 year old) would, but she’s the worst of them all, as she commits grand larceny more than once and causes tens of thousands of dollars worth of damage in a very short period of time! Hijinks!

And of course, the adults are imbeciles who just cannot figure out how to deal with a situation that is at best, a minor inconvenience compared with the intense and dangerous work they do on a daily basis.

I know, I know. This is a silly family movie, it’s not supposed to realistic. But it would help if it was at least somewhat grounded because it takes awhile to actually like any of these people. It does finally happen and somewhat earns the emotional punch it’s going for in the end, but again, that is mostly due to the skill of the actors. 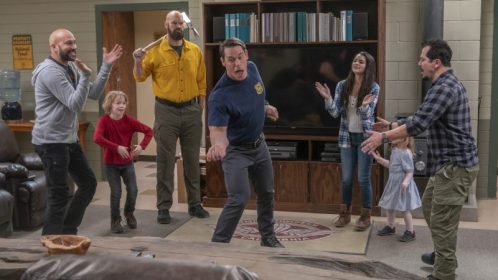 I don’t know who involved in producing this motion picture is a Brony, but someone most certainly is, because this whole film serves as a commercial for My Little Pony-related merchandise and programming. It’s sort of funny at first, but then it’s beat into the ground.

I get what they were trying to do here, but this was a bust. Despite a very talented cast doing their best, the material just falls as flat as Cena does several times. It’s harmless and means well though, so it works as a holdover for a family trip to the movies until Frozen 2 comes out.

Take a Drink: whenever there is a can of Spam visible

Take a Drink: for every mention of My Little Pony

Take a Drink: every time an adult falls down

Take a Drink: every time a child is injured

Take a Drink: every time Leguizamo’s character gets a quote wrong (trust me, it gets more and more grating each time)

Do a Shot: for every poop joke

Do a Shot: every time John Cena takes off his shirt