Okay wait, what if it was a space gun with really cool lights and holograms and stuff?

The kid, named Eli (Myles Truitt), is having a hard time getting over the death of his mother and gets suspended after acting out in school. He earns money by selling scrap metal taken from abandoned buildings. One day while foraging for copper he comes across some dead robots/aliens/whatever as well as a futuristic-looking weapon. One of the beings is alive and starts to chase him. Eli manages to get away and immediately contacts the police to tell them what has happened.

No, he doesn’t! He goes back, gets the space gun, and hides it in a duffel bag.

Meanwhile Eli’s brother Jimmy (Jack Reynor IS Chris Pratt AS Jimmy!) is home from a prison stint with some fresh skull knuckle tattoos.  He’s in some trouble though. He needs $60,000 not for laser tattoo removal but to pay back some bad guys who provided him protection in prison.

The leader of the gang is Taylor (James Franco, in one of those roles he is clearly enjoying the shit out of) and he wants his money now! Presumably to buy some more sweaters. 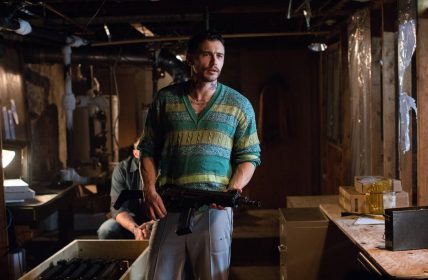 Poor ol’ tough but good-intentioned pa (Dennis Quaid at his gruffiest) gets mixed up in the dispute between Jimmy and Taylor’s gang. Soon the two estranged brothers are left with only each other and on the run with no plan, a bag of cash, and the space gun with both the bad guys and the robots/aliens/future-beings after them.

It’s always interesting to see an original idea as well as a fresh voice in cinema. Co-writers of the short film “Bag Man” on which Kin is based as well as co-directors, Jonathan & Josh Baker (Are they brothers? No….Yeeesss.) had an imaginative concept that often shows potential for what could have been a pretty solid and entertaining road trip/sci-fi flick. 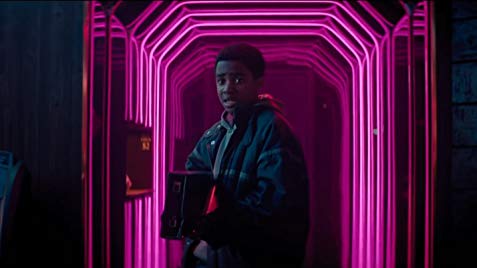 There are times when it feels like something that could have come out in the 80s (something that definitely didn’t go unnoticed, in case you missed the “From the producers of Stranger Things” marketing pitch). There are some cool special effects and the last twenty minutes or so amp things up to an insane level. The sound design and score are well done too. The cast is more than capable, particularly Truitt in his first role. All in all, it looks great and is put together competently.

Unfortunately a decent concept and a somewhat decent execution don’t go very far with this one . The first half of the movie has major pacing issues, slogging along likely to get as much use out of Dennis Quaid as his contract would allow. We get a lot of unnecessary backstory on both the central family as well as Franco’s character’s gang.

The weird thing is, for the major dramatic element the film is supposed to focus on: the brothers’ relationship, it rushes through any genuine moments between the two, instead opting to show the pair in one of those tired road trip bonding montages. Zoë Kravitz’s stripper-with-a-heart-of-gold (she works at the most comically PG-13 strip club ever put on film) gets the same treatment once she joins the pair in pretty much the.same.exact.montage. 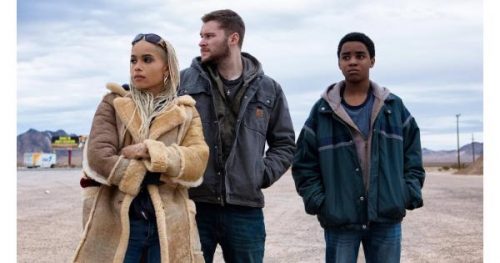 The film tries to be many things: a sci-fi, a family drama, a crime thriller, and a road romp, but never fully works as any of them. The tonal shifts are so klunky, it often feels like a first draft.

Or possibly two first drafts. One the story of the estranged brothers and the other, you know, that whole space gun/alien plot which I truly forgot about until about 45 minutes into the film when Eli finally opens his duffel bag and fires the gun for the first time.

I mentioned earlier the ending goes a bit bananas. It’s wonderful. Some moments are legitimately awesome, some are awesomely bad. Either way, I was on board. It felt like  finally, here we go! Here’s what all this is leading up to!

But then the big reveal falls flat. Everything (literally) stops and a character (surprise cameo!) delivers an exposition dump that somehow explains nothing and then it’s just…over.

It’s obvious this is an attempt at setting up a franchise (the only thing missing from the last scene is a “To be continued” graphic), but instead of leaving the audience wanting more, it simply leaves them wanting something different than what they just received.

Despite an original idea, some interesting style choices, a batshit James Franco, and a promising debut performance by Myles Truitt, Kin is a strange and often frustrating mix. Give it a watch on Netflix when it pops up in a month or so, but don’t hold your breath for a Next of Kin, as this one is likely to take a place next to John Carter and Beautiful Creatures as the first and last film of an intended franchise.

Take a Drink: whenever James Franco wears a different sweater

Take a Drink: whenever NotChrisPratt smirks

Take a Drink: for every driving & bonding montage

Take a Drink: whenever you forget about the space gun (or the mysterious creatures tracking it)

Do a Shot: every time the space gun is fired

Do a Shot: whenever anyone is killed

Do a Shot: for every unexpected cameo