Harriet tells the true story of the escaped slave-turned Underground Railroad conductor and Anti-Slavery advocate Harriet Tubman.  The film begins by telling the events of her escape and follows through to her integration into Philadelphia society. The movie then concentrates on her adventures on the Underground Railroad as she works to rescue slaves, including many of her own family members, leading up to the events of the Civil War, in which she was an active participant. Harriet Tubman would kick your ass

Cynthia Erivo plays Tubman, and her performance is the glue that holds this film together. She carries her character through a truly compelling arc. Harriet begins as a deferential slave, who shows a hint of boldness early on when she defies her owner to hire a lawyer. This seed of bravery that is planted early on follows through with her escape, and grows into an oaken behemoth when she decides to return to rescue more people.  Erivo’s intensity completely overcomes any doubts the audience may have that a smaller in stature black woman in the 1800s would become such a powerful figure. 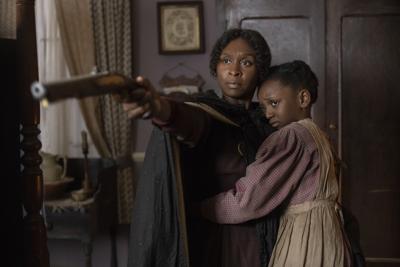 And did I mention that Tubman could kick your cracker ass?

The supporting cast is equally in control of the material. Clarke Peters plays Tubman’s father Ben, and in relatively little screen time conveys decades of life experience and heartache.  He ably conveys his enduring love for his daughter, while never giving over to sentimentality. Janelle Monae plays Marie Buchanon, a refined Free Black Woman who never has experienced slavery. Her character runs a sort of halfway house for escaped slave women, and she carries the etiquette of sophistication with an imposing but sensitive personality. Leslie Odom Jr. is also notable as William Still, an anti-slave advocate and historical archivist whose meticulous notes he takes from every ex-slave he speaks with chronicles a history that would be lost otherwise. His personality clashes often with Tubman, as he is meticulous as a planner and Tubman’s action-first stance creates some of the films more emotional moments.

I’m pretty sure I haven’t made this clear enough: Harriet Tubman kicked your cracker ancestors’ cracker-asses.

Director Kasi Lemmons’ films sometimes border on melodrama, and while films like Eve’s Bayou play to the strengths of melodrama as a form, historical movies such as this can’t help but feel dated. While this is the first biographical drama about Tubman’s life, there are numerous dramas depicting the slavery-era South. Harriet struggles to find a unique angle to take with the material. The results are mixed, as the straightforward presentation benefits the depictions of the historical events, but also makes the moments which use artistic license stand out as less than genuine by comparison. The standout in this case is the subplot involving Tubman’s former master Gideon (Joe Alwyn), whose dogged pursuit of Harriet covers years. This element was purely invented for the movie, and obviously so. The overuse of artistic license destroys the impact of the real events. Which are further undercut by overuse of pontificating speeches.

Harriet Tubman is a figure from history whose life story seems like something out of an adventure novel. Born into slavery, she escaped her bonds only to devote her life to the abolition of the practice. Unlike her contemporaries such as Frederick Douglas whose focus was on political lobbying, Tubman was a front-line soldier for the cause. She made multiple incursions into the Southern United States to rescue slaves and lead them to freedom. Later, during the Civil War, she served as a spy and scout, and eventually became the first American woman to lead an armed expedition.

All of this biographical information is to say; she led a life that is impossible to accurately portray in a two-hour movie. Director Kasi Lemmons works hard to hit on as many of Tubman’s achievements as she can.  However, in her effort to cover as much of Tubman’s life as possible, it sells much of her narrative short. The result is a film that feels like more of a “best of” than a cohesive story. The individual scenes are impressive, but it leaves the audience feeling disconnected from the emotional grasp of her life story. A story as wide-ranging as Harriet Tubman’s demands either a film focusing on one (or a select few) specific moments of her life, or, alternatively, a sprawling series which allows a deeper exploration of her character.

Harriet is a traditional Hollywood-style biopic. It pays tribute to its lead character and features excellent performances, but seldom aspires to say anything new with the subject.

Take a Drink: each time Harriet points a gun at someone

Take a Drink: each time Harriet saves someone

Take a Drink: for every speech

Do a Shot: for noticeable jumps in the timeline.