The first movie to start a dog was Rescued by Rover, in 1905, not even two decades after the first feature films debuted, and only two years after Jack London’s The Call of the Wild was published.  Man’s best friend and man’s favorite pasttime have almost always walked in lockstep.

The Call of the Wild is the obligatorily modernized update of the classic adventure tale, in which a city dog is kidnapped and taken to the gold fields of the Yukon, where he begins to get in touch with his wild, wolf-like roots while first serving as a mail courier sled dog and later the companion of a kindly prospector (Harrison Ford).

While the overall score of this one teeters on “don’t bother” due to a couple of big issues we’ll discuss below, I can’t say that I didn’t enjoy watching this film.  Sure, a little bit of it is due to the pure misplaced chutzpah of some of the filmmaking choices here (not all of the laughs to be had are intentional, that’s for sure), the film is undeniably sweet and does ultimately put its focus where it should be- Buck’s character arc from spoiled asshole housepet to rugged badass wilderness creature.

How to Train Your Dragon and Lilo and Stitch‘s Chris Sanders does use his blatant CGI bias for some good, too- there’s several legitimately engaging action sequences and some truly beautiful natural vistas that he can’t help but add some Thomas Kincaid-like touch-ups to, but which pop on the big screen anyways.

Finally, the principal cast of good guys, particularly Ford and the sled team duo played by Omar Sy and Cara Gee, inject a lot of much-needed pathos into their scenes with Terry Notary in a goofy dog-man get-up.  Truly, staring into the eyes of Notary playing a dog and emoting realistic man-dog love is some Grade A acting.

There is one principal problem with this film, and it’s a big one.  There is almost no goddamned reason why Buck needed to be CGI.  We’re at year 115 of movies starring dogs, and while I’m all for productions supplementing real dog actors with CGI ones for particularly dangerous scenes instead of Milo and Otising a bunch of animals into early graves, you don’t need a bunch of ones and zeroes to stand in for a damn pup sitting and raising a paw. 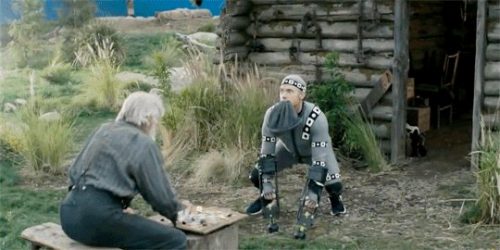 While you do get used to the slightly off physics and humanlike facial movements of Buck after awhile, much like the uncanny valleys of Robert DeNiro’s face in The Irishman, I can’t help but think that we’ll be looking back on this in 10 years and wondering how the fuck this ever constituted acceptable entertainment.  Kind of like The Rock in The Scorpion King.  Go look up some scenes of that one- it’s hilarious.

Okay, there’s two principal problems.  This movie is bald-faced in its emotional manipulation and its simplistic humor.  All of the emotional beats are manufactured on the spot instead of set up and subtle, and it’s chock-full of dumb comic asides like Buck picking up a giant gold nugget, seeing Harrison Ford finding a small, realistic-sized one, and dropping it back in the river to pick up a smaller one and bring it to him.  Uggh.

This “let’s go as broad as possible” ethos extends to its villain, played by Dan Stevens for maximum villainistic effect in the minimum screentime possible.  Every scene he’s in is Snidely Whiplash-level ridiculous, including a few that occur well after his character had exited in the book, contributing to an ending that is likely more politically correct (something tells me Buck murdering a bunch of Indians wouldn’t play so well in PG these days), but lazily set up. 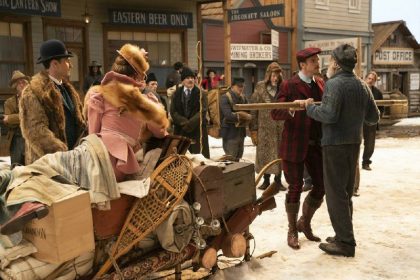 The Call of the Wild is an undeniably sweet, but often cheaply manipulative film with a CGI-first approach that you get used to, but which will age incredibly poorly.

Take a Drink: every time the spirit wolf shows up

Take a Drink: every time Buck gives a human reaction or eye roll

Take a Drink: every time a rabbit shows up

Take a Drink: every time Dan Stevens dials it up to 11

Take a Drink: every time a recognizable character actor shows up for a brief cameo