I was sold on Birds of Passage right from the start- not just because of Ciro Guerra (Embrace of the Serpent), but simply because of that poster. 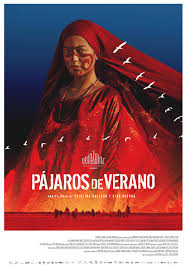 Yeah, I have to know what’s going on here.

Birds of Passage is a generations-spanning drug empire epic from a very different POV- an indigenous Wayuu family that begins by selling marijuana to American interlopers and climbs the ladder from there.  But as wealth and traditional notions of honor collide, both are threatened.

Guerra has made a sweeping crime epic in a very unique culture and place, a perspective on the oft-told Colombian drug cartel story that features a cartel unlike any you’ve ever seen.   Those who love City of God or any gangster epic with a different approach to the same old tropes will be fans.

Guerra achieves this via gorgeous cinematography and costume design (and production design- that mansion in the desert!).  All contribute alongside strong acting all around to an undercurrent of symbolism and visual rhyming that enriches the tragic rise and fall of the plot.

The facade may be incredibly unique, but the superstructure is familiar- for example, there’s not one, but two wildcards who introduce volatility and force a choice between family and fortune.

Also, Colombia’s view of the Peace Corps is simultaneously very off, and… not entirely.  Still, nobody’s making enough money in the Peace Corps to buy kilos of anything, even rice.

Birds of Passage is a sweeping crime family epic that immerses you in a culture and time you’re almost certainly experiencing for the first time here.

Take a Drink: whenever one of the two wildcards does something stupid

Take a Drink: for every family council

Take a Drink: for every message delivered via Speaker

Take a Drink: for gringos

Do a Shot: for catastrophic shoot-outs