I keep using this example only because it was the most entertaining by far.

Arctic Dogs stars Jeremy Renner as Swifty the arctic fox, who wants nothing more than to be a sled dog.  Will he get to be one despite his slight frame, will he get the Heidi Klum-voiced girl fox, will he foil the John Cleese-voiced evil walrus industrialist trying to destroy the environment?  Does an Alec Baldwin-voiced bear sleep in the woods?

In a textbook case of damning with faint praise, the most I can say positive about this one is it’s not as exceptionally shitty as Norm of the North.  Yes, the animation is dishearteningly competent, and no other element assaults the senses in the same intriguingly awful way as nearly every choice in that film.

The hyperactive lead performance from Jeremy Renner is out of sync with the other highly odd mix of voice actors that includes Alec Baldwin (playing the sidekick), Heidi Klum (the obligatory love interest), and Angelica Huston (who just places Russians now apparently).  Verbal velocity doesn’t make for comedy all on its lonesome.

Neither do transparently Minion-inspired nonverbal henchmen.

That’s not the worst of it, though, because, you guessed it, Jeremy Renner also sings, and I’m willing to wager a buffalo nickle the amount of songs he got to include was a prominent part of his contract.

Who asked for this?

I’m starting to theorize about why so damn many lower-rent animated film use an arctic setting- animating snow and ice has got to be the cheapest possible option.  You’ll find no evidence whatsoever that I’m wrong on this in Arctic Dogs.

Powering the plot forward is the most generic of children’s movie messages, namely “just be yourself” and “destroying the environment is bad”.  There must be some screenwriting cost economy to these on par with the arctic setting computer animation savings.

When you construct a plot and script entirely out of cliches, it’s probably not surprising that they don’t all fit together exactly.  The questions about just how this world works, or just how long these characters have known each other and how pile up too fast to count.  Don’t bother trying.

Arctic Dogs is both as cheap and uninteresting as you’d expect from the trailers and nowhere near as incompetent as you’d rightfully hope. 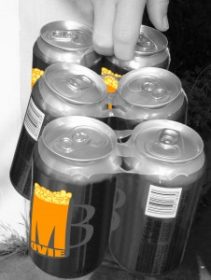 Take a Drink: whenever somebody says “just a fox”

Take a Drink: whenever Angelica Huston moose takes it upon herself to crush an employee’s dream

Take a Drink: whenever one of those gross puffins shows up

Take a Drink: whenever somebody goes on a package delivery, truly the stuff of heroism

Do a Shot: for every new Renner-voiced song