By: Oberst Von Berauscht (A Toast) –

David Kessler (David Naughton) and Jack Goodman (Griffin Dunne) are American college students backpacking through Europe, starting with England.  They come upon a small village far out in the moors, and in the local pub, are warned to stay on the road as they continue their journey. As is typical of college men, they immediately ignore that and find themselves straying off the path. Only to be found by a wolf, who mauls Jack to death and nearly kills David. The locals kill the wolf and the last thing David sees before passing out is a dead naked man in place of where the wolf used to be.

Hate when that happens…

While recuperating in the hospital, David finds himself having increasingly disturbing dreams. But on the other hand, he seems to be having a stroke of luck as his Nurse named Alex (Jenny Agutter) finds him extremely attractive and the two begin a whirlwind romance.  And then his dead friend Jack appears before him and tells him that he’s going to become a werewolf at the next full moon.

I really hate when that happens…

After being released from the hospital, David is invited to stay with Alex and the two begin a torrid love affair. And soon David’s visions turn to reality as the full moon arrives and he undergoes a horrifying transformation. 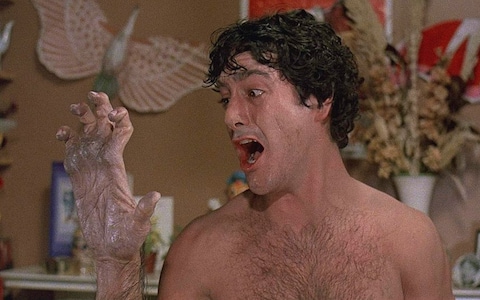 Again, I really really hate when that happens…

An American Werewolf in London is one of those movies that grows better and better with each viewing.  David Naughton and Griffin Dunne are an amazing team and instantly believable as longtime friends. Their onscreen chemistry is perhaps challenged only by Naughton’s sexual chemistry with Jenny Agutter. In relatively little screen time the two manage to be totally convincing as a couple experiencing romance at high speed. 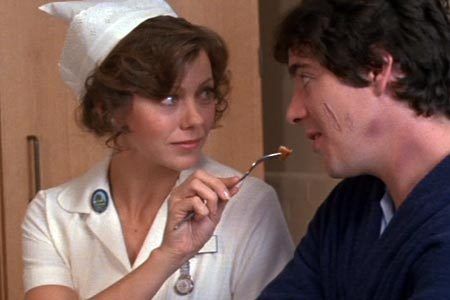 The special effects team led by the venerable Rick Baker are nothing short of amazing. Particularly challenging was the transformation sequence, which was shot in a brightly lit setting, which would normally show off all of the flaws of the effects. Baker’s brilliant work won him an Academy award, and while he’d best himself in films after this one, the effects work represents a watershed moment in makeup work that changed the way films like this were presented.

It almost makes me want to cry…

Raising the bar for monster movies even higher is the tremendous supporting cast of mostly British actors. It is far too common for films of this sort to front-load the lead cast and save money in the budget by ignoring the supporting players. Thankfully by this time in his career director John Landis had built enough clout for a budget that supported everything the film was trying to accomplish. Supporting cast highlights include John Woodvine as the inquisitive Dr. Hirsch, and Frank Oz as the American embassy employee.

Director John Landis wrote the script for this film when he was in his late teens and early 20s, and sat on it until he could get the budget to do it right. That time paid off, and I assume he polished the script in that duration as well. The result is one of the most quotable and entertaining horror films of its period. Not just because of the thrilling horror sequences, but because the dialogue is so memorable. These are characters you care about because they make you empathize with them from the first moment they’re on screen to the last. And the central tragedy within the story is highlighted by the fact that you found the characters so infinitely likable.

The latest Blu Ray release from Arrow is the best way to view the film to date, short of seeing it on the big screen. The remastered image quality looks as good as new, and the special features packing the disc include a new full length commentary track from documentarian Paul Davis, whose feature length making of film Beware the Moon is also included. There is another feature length documentary Mark of The Beast: The Legacy of the Universal Werewolf which is an in depth look at Hollywood’s portrayal of Werewolves. Also included are numerous featurettes on various aspects of the filmmaking process and a new interview with John Landis where he reflects on the film’s impact on his career. This release is highly recommended for new and old fans alike.

An excellent monster movie that holds up with comedic elements that hold up just as well. This remarkably solid horror film remains essential today. Bonus points should be given to the Blu-Ray, which is packed to the gills with special features, including hours of documentary material to sift through.

Take a Drink: for each killing

Take a Drink: for each pop song with the word “Moon” in the lyrics

Do a Shot: during the transition sequence