This week has been about two things- work and catching up on some TV (and watching Roma again).

Here I go again claiming that an 8-episode, roughly 4 hour Amazon series is a film.  Well, for one, stars Maya Rudolph and Fred Armisen seem to think so, and for two, it tells such a beautifully complete story of a marriage that, quite literally, may be forever, but that doesn’t mean that growth and surprising each other isn’t possible.  The story it tells is a simple but beautiful arc- here’s hoping they leave as it is.  Two Beers.

This indie serial killer movie feels of a piece with My Friend Dahmer and I Am Not a Serial Killer, in tone and style if not (obviously) denouement.  Charlie Plummer adds another stand-out performance after Lean on Pete as a boy scout who is starting to suspect his father is a dormant Green River-like killer and Dylan McDermott flexes some dramatic muscles we don’t often see him use as that seemingly perfect family man.  Two Beers. 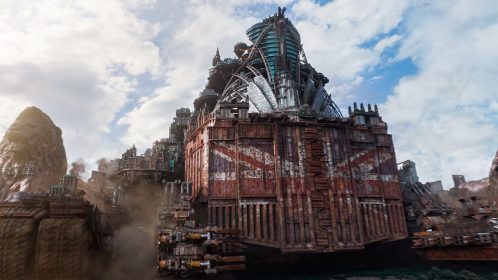 This side-hustle of Peter Jackson (he produces for his long-time VFX supervisor Christian Rivers to direct) was one of 2018’s notable box office bombs, but it does boast some compelling Steam-Punk Dystopian world-building and visual effects-driven action choreography.  What it doesn’t have is a particularly compelling or non-derivative story (this is a peak Tell-Don’t-Show-er), an expository monologue it doesn’t love, nor an emotional beat it doesn’t over-explain.  Four Beers.

Director Mathew Cullen claims that the distributor muffed his misunderstood masterpiece by wresting control of the final cut of the film.  I’m here to tell you that there isn’t a director or editor alive who could fashion a coherent, quality film out of the raw materials of this Guy Ritchie wanna-be.  London Fields is the kind of adaptation that makes you doubt the talent of the writer, Martin Amis, and maybe the talent of an entire genre of writers.  Does London Fields kill the Noir genre in the 21st Century altogether?  Yes, yes it does.  Six Pack.

Everything about this besides its length is contained, addictively engaging, so crazy it’s true documentary feature gold.  How did this cult vs. small town story ever get largely forgotten about, and how are Sannyasins still a thing?  Documentary Now!‘s next season certainly is capitalizing, releasing its double-episode send-up of the series and the cult on Youtube for free a few weeks before its premiere.  Taken together, they’re a pretty informative and amusing point/counterpoint.  Three Beers.

The latest “let’s throw a horror film at the late winter wall and see if it sticks” attempt is the professionally made, entirely unambitious studio horror film promised in the trailers.  You’ll guess every plot turn and get a good jolt 2-3 times and if that’s all you need out of a big screen horror film, here you go.  Four Beers.

Like it or not, it’s been 20 years since this seminal action film came out, and the blockbuster world’s a different and largely better place for it.  It has to have been at least a decade since I saw it start to finish last, and yet it feels like I know it beat by beat.  Shit, even (most of) the effects and (most of) the wonky Wachowski philosophizing hold up.  A stone cold classic.  Two Beers.