As I continue to catch up with a year’s worth of missed and late-arriving releases, the 2018 grab-bag continues to be quite mixed.

While, as Greengrass does, this film portrays the lead-up and commission of Anders Breivik heinous bombing and shootings that left 77 dead, most innocent teenagers in terrible detail, this film is not really about this act.  Rather, it’s about the ensuing trial, in which the Far Right castrato, who mostly spends his days now threatening hunger strikes over not having access to a Playstation 3, has his day in court and finds that not even his own mother or his Nazi consorts will stand by him.  A film that does as credible a job as any of recent examining the toxic mindset of a loud but pitiful subset of white society and the craven lengths they’ll go to for attention.  Three Beers.

The latest genre juggernaut from director Jeremy Saulnier and writer/actor Macon Blair after Blue Ruin and Green Book is, like the others, stunningly shot, particularly its violence that is brutal, realistic, and painfully weighty- no entertaining remove here, just violence.  It’s also an achievement in mood and brooding menace, again due to Saulnier’s masterful direction, but where it falls short is narrative- there really isn’t one that makes sense in the end, or satisfies.  Still quite an achievement, just further down the artsy scale than breakout Green Book.  Three Beers.

Entourage‘s own Kevin Connolly has clearly been watching his Scorcese, but either himself or editor-for-hire Jim Flynn (Atlas Shrugged: Part I!) lost whatever the narrative through-line they were going for when they first made the very bad decision to cut this thing any way but chronologically.  It doesn’t help that Travolta’s hamming it up with a mahb-stuh accent for the ages, again hilariously playing decades young for parts of this thing, or that Connolly & Co (and apparently a good subsection of NYC mooks at the time) apparently have a difficult time differentiating between Catholic martyrs and bloody-handed mobsters who have earned what’s coming to them in spades.  Five Beers.

Well, this is clearly an art film, and clearly cobbled together from a hodgepodge of footage of varying degrees of quality and completeness.  Perhaps the remarkable part is that anything halfway coherent was able to be assembled, particularly when much of this stylistic confusion was very much on purpose and self-referential to the extreme.  There’s undoubtedly moments of Welles-level brilliance spotted throughout, however, including one of the steamiest sex scenes perhaps ever set to film- it’s easy to see why so much effort has been expended over the last 40 years to bring this project finally to fruition.  Four Beers. 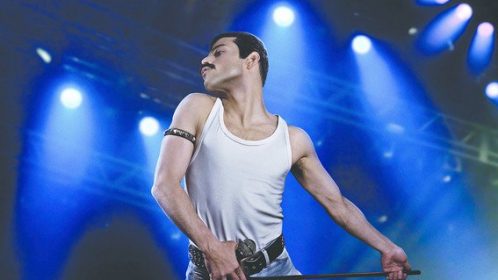 There is no damn reason this was over two  hours long, and the attempts to get into Freddie Mercury’s head are a bit obvious and unevenly effective.  However, there’s no denying the sheer charisma of Rami Malek’s performance, nor the power of the film-ending Live Aid performance (although making it the apex of the film involves some Spike Lee-brand fo real, fo real shit- aka, pure dramatic license). In all, though, Queen fans will not be disappointed, and what are you, not a Queen fan?  Three Beers.

Denmark’s 2019 Oscar Foreign Language Film nominee made the shortlist and has a real shot at a nomination, and watching this lean, mean mostly single actor, single location thriller makes it quickly apparent why.  Director Gustav Moller and star Jakob Cedergren command your attention in which a 112 (Denmark’s 911) responder tries to save a kidnapped woman in a car, perhaps motivated in part by a deposition the next day for something that appears to have taken him off the streets and put him on phone duty.  What’s so daring about this film is how the protagonist is actually kind of terrible at this- no more immune to the twists and turns of the plot as we are.  Two Beers.

14.  The House that Jack Built

Misanthropic as all fuck, but it’s a Lars von Trier joint, so what’d ya expect?  Once more stringing up his psychological laundry for all to see, to an effect that’s been diminishing since the credits rolled on the first half of Nymphomaniac, here’s hoping he can back on up to making art for even the twisted love of it.  As for this one, Matt Dillon gives one hell of a committed, sometimes inky darkly funny performance, and the gore is, well, gory as all get out.  The final descent is some of the most striking imagery of von Trier’s career.  Three Beers.